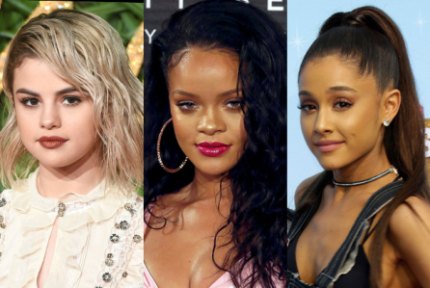 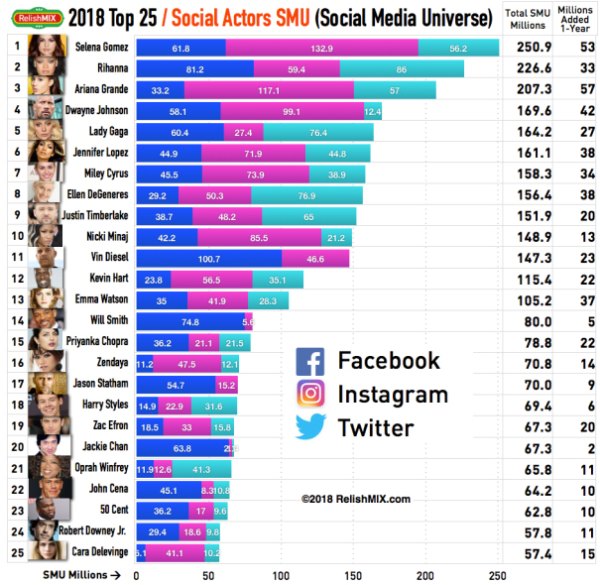 It’s been two years since we looked at the social media star power ranking in Hollywood and some things have really changed since then. In 2016, there were four men in the Top 10, but starting off 2018 there are now only two. And we are seeing a major boost in the last year — with nine of the Top Ten social media stars all adding over 25M fans each across the big three platforms of Facebook, Instagram and Twitter.

Why is this happening? Well, in the last two years, the most fan and star-friendly platform has become Instagram with half of the top 25 with over 40M followers now on that platform. As marketers know, social media can have a major impact in helping to promote television shows and films by having these social media stars engage directly with their fans. It is not unusual now for fans to learn of news first for their favorite movies or television shows before the media gets a whiff of it.

Deadline asked RelishMIX to pull together the stats for us and create a Top 25 Social Media Star Power Chart. It’s no surprise that the Top 3 power players are performers who also act and who keep their music fans engaged continuously — Selenz Gomez (A Rainy Day in New York, Neighbors 2), Rihanna (Oceans 8, Valerian) and Ariana Grande (Zoolander 2, Scream Queens).

Singer/actor Gomez, with a social media universe (SMU) of 250M, ranked No. 1, having added 53M in the year. Returning in third place is Ariana Grande with a SMU of 207M; she added 57M new fans combined from 2016.

The top male in the list is a man who has kept fans guessing about a Presidential run — Dwayne “The Rock” Johnson — who comes in behind the ladies at No. 4. The only other male in the Top 10 is Justin Timberlake at No. 9.

Two years ago, Johnson was No. 5 and Timberlake was No. 4 while two other men — social legend Vin Diesel and comedian/actor Kevin Hart — were in the Top 10. This year, both Diesel and Hart are out of the Top 10 and Nicki Minaj (The Other Woman) and Rihanna are in. Minaj stepped into the No. 10 spot with 148M fans after her part in The Other Woman.

Even though they are no longer in the Top 10, Diesel’s and Hart’s SMUs are incredibly impressive with 147.3M and 115.3M, respectively.

Another singer/songwriter/actress who came back this year at No. 5 (down from No. 3 in 2016) is Lady Gaga. Her movie, Bradley Cooper’s remake of the classic IP A Star Is Born, will be released from Warner Bros. in October of this year so they have a huge SMU of 164.2M to tap into. She added 27M fans this year.

Instagram social media stars are topped by Gomez’ 132.9M SMU, Grande’s 117.1M SMU and the top male actor Johnson’s 99.1M. Diesel, who collected over 100M followers on Facebook in 2016, now has amassed another 46.6M on Instagram. In our 2014 analysis, there was no following to speak of on the platform.

Also new to the Top 25 chart is One Direction’s singer/songwriter and actor Harry Styles in No. 18 with a 69.4M SMU. Styles’ popularity here and abroad was credited with helping to boost the box office for Christopher Nolan’s WWII epic Dunkirk which was nominated for eight Academy Awards including Best Picture and Best Director (a first for Nolan). The film overperformed at the worldwide box office with $525.57M.

Other top newcomers include Priyanka Chopra (Baywatch, Quantico) with a SMU of 78.8M and Zendaya from Spider-Man Homecoming and The Greatest Showman with a SMU of 70.8M.

Other strong notables to keep an eye on, according to RelishMix, are Adam Sandler (57M SMU) who won critical acclaim for his work in The Meyerowitz Stories as well as social pro Tom Hiddleston with an 11.5M SMU. “Hiddleston uses his celebrity to shout out for causes and is very professional in promoting his projects,” said RelishMIX’s lead strategist Marc Karzen. “He is a perfect example of what stars should do.”

Why? “As the entire industry transforms to streaming TV originals and streaming home entertainment, we expect to see more and more brands wrapping themselves around stars who have activated massive social channels to drive bigger ad deals — with that, reps then can show that they have clients who can prove that they can deliver an audience,” said Karzen.