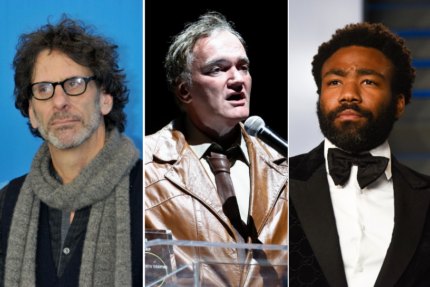 Whether it’s a Pulitzer Prize-nominated screenwiter penning a Matthew McCouanghey romantic-comedy or an Oscar-winning dramatist helping tell the story of an animated panda bear, the history of script rewrites is full of surprises. Quentin Tarantino, Charlie Kaufman, the Coen brothers, and more have all spent time polishing up works you would never expect.

Apatow worked as an uncredited script doctor on the 2003 Jim Carrey star vehicle “Bruce Almighty.” His work put him touch with one of the film’s supporting actors, Steve Carell, who would go on to lead Apatow’s directorial debut “The 40-Year-Old Virgin” in 2005.

Indie favorite Noah Baumbach did 60 pages worth of rewrites on Eric Darnell’s screenplay for the third installment of DreamWorks’ “Madagascar” franchise. Baumbach’s work was so extensive that he received an official credit.

Shane Black directed “Iron Man 3,” but he also played a part in punching up the script to the 2008 original, directed by Jon Favreau. Black had worked with Robert Downey Jr. on “Kiss Kiss Bang Bang,” and the actor consulted with Black about the story and Tony Stark’s dialogue.

Joel and Ethan Coen, “Fun With Dick and Jane”

The Coen Brothers rewrote Peter Tolan’s script for “Dick and Jane,” which starred Jim Carrey and Tea Leoni and was directed by Dean Parisot. The brothers’ script polish came at a time when Cameron Diaz was attached to star in the co-lead role.

Fisher was one of Hollywood’s most famous script doctors, having worked on scripts for “Hook,” “The Wedding Singer,” “Lethal Weapon 3,” and more. Her script rewrites were so well known in the industry that she was called the “the most sought after [script] doctor in town” by Entertainment Weekly.

Glover told Entertainment Weekly that he punched up the jokes in Ryan Coogler’s Marvel tentpole “Black Panther” with help from his brother, Stephen. Coogler thanked the Glover brothers with a shout out in the end credits.

Charlie Kaufman and DreamWorks Animation don’t sound like they go together, but the Oscar winner behind “Eternal Sunshine of the Spotless Mind” consulted on the script and wrote jokes for “Kung Fu Panda 2” and spent two weeks polishing it up.

Before he won the Oscar for writing “Manchester by the Sea,” playwright Kenneth Lonergan took a stab at the adventure comedy “Fool’s Gold.” Lonergan rewrote John Claflin and Dan Zelman’s original script before Matthew McConaughey and Kate Hudson signed on to star.

McKay and “Elf” star Will Ferrell have been friends and collaborators for years, and the “Anchorman” director worked with the comedian to punch up the script for Jon Favreau’s Christmas classic. McKay told the Chicago Tribune that the “Elf” re-writes got in the way of making “Anchorman,” which frustrated him since he had no idea how popular “Elf” would turn out to be with audiences.

Oswalt punched up Larry Doyle’s script for the 2003 live-action/animated “Looney Tunes” film with help from “Comedy Bang! Bang!” host Scott Aukerman. Doyle received the only script credit when the movie was released. The two comedians talked about the rewrites on the January 29 episode of the “Comedy Bang Bang” podcast.

Alexander Payne and his co-writer Jim Taylor originally polished Barry Fanaro’s script for “I Now Pronounce You Chuck and Larry” in 2005, which attracted Adam Sandler to the project. Unfortunately, Sandler gave Payne’s script his own rewrite, so much of what the “Downsizing” director wrote was tweaked. Payne and Taylor both got credit for the film. Head to Vulture for more on the movie’s script development.

M. Night Shyamalan, “She’s All That”

Around the same time Shyamalan was writing the script for “Stuart Little” and beginning work on “The Sixth Sense” screenplay, he helped re-write the story and dialogue on R. Lee Fleming, Jr.’s classic teen comedy. Shyamalan’s work was uncredited.

Steven Spielberg invited Aaron Sorkin to do a “dialogue wash” on Steven Zaillian’s script for Holocaust drama “Schindler’s List.” Sorkin acted less as a script doctor and more as a dialogue consultant for Spielberg. Zallian received full credit for the movie.

Julia Sweeney’s androgynous “Saturday Night Live” character Pat Riley got an entire feature-length movie with help from Tarantino. Sweeney wrote the film with Jim Emerson and Stephen Hibbert, who Tarantino later cast as the leather-clad Gimp in “Pulp Fiction.” Tarantino says his love for Pat’s obnoxious side led him to say “yes” to the screenplay job.

“Speed” director Jan de Bont brought on Joss Whedon to help punch up the script a week before filming started. Screenwriter Graham Yost admitted Whedon wrote nearly all of the dialogue in the film, but Whedon was uncredited when the film came out.