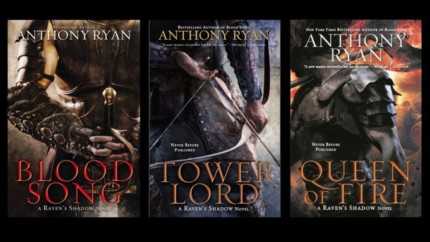 Blood Song tells the story of Vaelin Al Sorna, who at 10 was left by his father at the iron gate of the Sixth Order to be trained and hardened to the austere, celibate and dangerous life of a warrior of the Faith. Vaelin’s father was Battle Lord to King Janus, ruler of the Unified Realm. Having been abandoned, Vaelin was deprived of his birthright and his rage swelled. His cherished memories of his mother are soon challenged by what he learns within the Order. But one truth overpowers all the rest: Vaelin Al Sorna is destined for a future he has yet to comprehend, one that will alter the world.

“I am very excited at the prospect of my work making it to the screen and delighted that fans of the Raven’s Shadow series may finally get the adaptation so many have been asking for. Joseph Muszynski has produced a terrific pilot script that does justice to the story and fully captures the spirit of the books,” said Ryan.

Raven’s Shadow has been on many 2012 “best of” lists. The sequels, Tower Lord and Queen of Fire, were both New York Times bestsellers and international bestsellers.