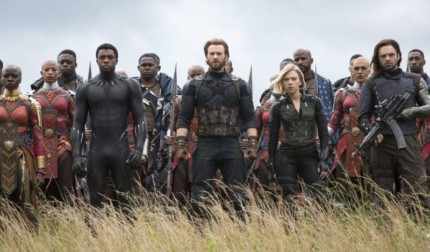 The box office-busting franchise has already lined up a slew of exciting indie directors and returning faves for its next iteration, and with staked out release dates, it’s anyone’s guess what comes next. Here’s ours.

By the end of Anthony and Joe Russo’s “Avengers: Infinity War,” the Marvel Cinematic Universe was forever altered, at least until this month’s “Avengers: Endgame,” which promises to provide a satisfying conclusion to both the world-changing “snap” that killed off half the known universe and end the franchise’s so-called Infinity Saga. While both Disney and Marvel have remained predictably mum on what’s to come for the MCU after the Avengers-centric series presumably concludes, they’ve been unable to avoid setting aside a slew of dates for upcoming features, along with lining up new titles, directors, and casts to kit them out.

Over the coming years, Marvel and Disney have already staked out a number of future release dates for new MCU movies, including eight locked-in dates that run from 2020 until 2022 — only one of these, “Spider-Man: Far From Home,” is confirmed for one of these dates. Marvel head Kevin Feige has said that the studio actually has enough storylines planned out to take the series though 2028 with a total of 20 films. In 2017, he told Collider, “what happens after [Avengers: Endgame] will be very different. I don’t know if it’s Phase Four, it might be a new thing.”

With Phase Three concluding this year and the current Avengers-centric timeline along with it, Marvel is clearly feeling confident enough for what it’s got in the works to put down roots for the foreseeable future. So what does an MCU release date calendar look like after “Endgame”? Here are our best guesses for what, after “Far From Home,” could be released on the dates Marvel Studios has already reserved.

Post-“Endgame,” the only confirmed MCU title on the calendar is the much-anticipated sequel to Jon Watts’ “Spider-Man: Homecoming,” which Feige recently announced is the actual end to the so-called Phase Three of the MCU. While rumors of sequels to “Black Panther,” “Guardians of the Galaxy,” and “Doctor Strange” persisted long after the seemingly game-changing end of “Avengers: Infinity War” — which, quite notably, killed off the majority of the star characters from each film — “Spider-Man: Homecoming” has been dated to follow “Endgame” for months. So, what does that mean?

In June 2017, producer Amy Pascal told Fandom that the film “will start a few minutes after ‘Avengers 4’ wraps as a story.” While “Infinity War” and “Endgame” are two separate movies, they are considered to be part of the same story — the “Avengers 4” title Pascal referred to — meaning that this film picks up after Tom Holland’s Peter Parker has been “snapped” in “Infinity War” and presumably brought back to life in “Endgame.”

The Sony film will act as a major reunion for the team behind the successful series re-starter “Homecoming,” with Watts returning to the directors’ chair, along with stars Holland, Jacob Batalon, Zendaya, Jon Favreau, Marisa Tomei, Michael Keaton, Tony Revolori, Angourie Rice, Laura Harrier, Hemky Madera, and Martin Starr. Newcomers to the franchise include Jake Gyllenhaal as Mysterio, a traditional Spidey antagonist who is apparently going to be assisting Peter while he takes on a crazy mission during a class trip to London.

A “Black Widow” standalone film has been bandied about by Marvel for years, but actual development kicked into high gear when Jac Schaeffer was hired to write the film’s screenplay in January 2018 (a year later, Ned Benson came on board for a re-write). A search for a director soon followed, with names like Amma Asante, Cate Shortland, Maggie Betts, Deniz Gamze Ergüven, Chloe Zhao, and Lucrecia Martel being tossed around, before the studio picked Shortland, known for “Lore” and “Berlin Syndrome,” to helm the picture.

MCU star Scarlett Johansson will of course reprise her role in the film (though recent developments in the MCU indicate this will likely be some sort of prequel story), and recent casting news has revealed a steadily growing slate of talents, including Florence Pugh, Rachel Weisz, David Harbour, and O-T Fagbenle. As of now, filming is expected to begin in June 2019, making it the next MCU film to hit the production line post-Phase Three, and likely the next film to arrive in theaters.

After “Black Widow,” the MCU’s prospects get wilder and weirder, as Feige’s promise for a “very different” franchise starts to finally take shape. While “The Rider” director Chloe Zhao was at one time rumored to be in the running for “Black Widow,” she ultimately signed on for something a little more offbeat: a big screen take on Jack Kirby’s 1976 creation “The Eternals.”

The “Eternals” storyline has far-reaching implications for the entire franchise, as Kirby’s original characters first emerged millions of years in the past, with a storyline concerning cosmic beings called Celestials whose experiments on humans result in both heroes and villains with supernatural abilities. (And, yes, the Celestials are also to thank for the experiments that led to the creation of superheroes.) As the MCU has edged more into cosmic storylines, from “Guardians of the Galaxy” to “Captain Marvel,” the possibility of an “Eternals” film has persisted, and now it’s finally readying for production.

In the spring of 2018, Matthew and Ryan Firpo were hired to write the film’s screenplay, with Zhao officially coming on board to direct in September of last year. Rumors hold that the film will focus on Sersi, set to be played by no less than Angelina Jolie, with Kumail Nanjiani and Dong-seok Ma also on deck to star. While Sersi’s history — like all of the Eternals — is fraught and complicated, recent comic book plotlines could hint at a way for the MCU to incorporate the Eternals into a modern storyline. In a 2006 mini-series written by Neil Gaiman, the Eternals exist in a contemporary setting, but all have forgotten their true identities, and the series followed them as they come to understand both who and what they are, with some shocking conclusions.

Production on the film is set to start this August in Atlanta, putting it just a few months behind “Black Widow.”

Thank “Infinity War” for creating this pickle: despite “Black Panther” director Ryan Coogler signing on to write and direct the smash hit’s sequel in October of last year, star Chadwick Boseman has kept hilariously mum about the future of his superhero, just like the studio itself. Official dating or not, the film is happening, and returning to an unexpected February release date that made the first film the highest-grossing entry in the MCU yet only makes sense.

For the franchise’s first Asian-led film, the MCU has again reached into the indie filmmaking pool for its helmer: “Short Term 12” breakout Destin Daniel Cretton. The movie will be the first film in the franchise to feature an Asian superhero in the lead role and have a predominantly Asian cast. The project was first announced last December, with reports saying it was top priority for Marvel to find an Asian or Asian-American director for the movie.

“Shang-Chi” is being written by Chinese-American screenwriter Dave Callaham, whose credits include “The Expendables” franchise and the upcoming “Wonder Woman 1984,” which he co-wrote with Patty Jenkins and Geoff Johns. Shang-Chi was introduced in 1971 and is often referred to as the Master of Kung Fu in the comic books. The character has extraordinary martial arts skills and in some comics has the power to create duplicates of himself.

While no casting has been announced as of yet, word that Feige and Marvel want to “fast-track” the film’s development indicate that the studio is eager to get this title moving, and soon.

It’s the “Black Panther” problem all over again. Though Benedict Cumberbatch’s Doctor Strange died in “Infinity War,” in December of last year, filmmaker Scott Derrickson signed a deal to return for a followup to the 2016 origin story for the good doctor. Both Cumberbatch and his sidekick, played by Benedict Wong, are slated to return (of note, Wong’s character, also known as Wong, did survive Thanos’ snap) for the sequel.

Production is believed to be kicking off in the spring of 2020, and while that might mean the film could snag the previous May 2021 release date, the first film did open in late October, and placing this one in November would be a nice nod back to its autumn roots.

Yes, another Spidey film. The first sequel to “Homecoming” hasn’t even been released yet, but rumors have long persisted that the popular reboot was gearing up for a trilogy. In an April 2017 set visit piece, /Film reported that star Tom Holland had told assembled press that a third film would focus on Peter’s senior year of high school, nicely tying up a trio of features about the teen superhero.

After firing two-time “Guardians” director James Gunn for controversial tweets that resurfaced last July, Marvel and Disney apparently struggled to replace the beloved filmmaker for a planned third feature. By this March, the studio had relented, reinstating Gunn to the director’s chair and making it clear that he will be able to start production on the film as schedule allows, which might involve some serious waiting, as Gunn added DC’s “The Suicide Squad” to his slate in the interim. Not a bad problem for Gunn to have, but one that will certainly keep Marvel from being able to make the film in the foreseeable future.

DC will reportedly start production on its film in September of this year, with a set August 6, 2021 release date already on their calendar. A summer 2022 release date for “GOTG, Vol. 3” sounds like a tight turnaround, but it would offer up the same kind of prime seasonal spot the films have enjoyed in the past. The end of “Endgame” sets up plenty of new adventures for a slightly tweaked lineup of Guardians, and Gunn himself has already confirmed that the film will take place after “Endgame.”

It’s only towards the end of Marvel’s staked-out dates do things get really fuzzy. There are a handful of titles that have already been chattered about and seem fairly obvious, from a possible “Captain Marvel” sequel to a new “Thor,” but there are some real outliers too, like a new “Blade,” which has been rumored for years. But with at least one prime summer spot still (mostly) open for the taking, there’s another answer to consider: a whole new franchise-within-a-franchise. Our bet? A “Captain Marvel” sequel with global implications, just like “Captain America: Civil War,” which set in motion many of the events that came to fruition to kick off Phase Three. These things are cyclical, after all.