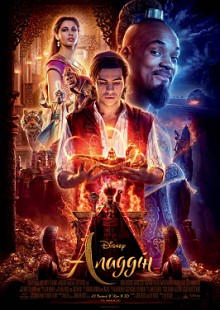 Disney’s “Aladdin” is crossing a box office milestone with $900 million in worldwide grosses since its release in late May — making it one of the studio’s most successful live-action reboots from its animated library.

Disney announced Friday that “Aladdin” had hit $897.3 million and would join six other Disney live-action titles in crossing the $900 million mark — led by “Beauty and the Beast” at $1.26 billion, “The Jungle Book,” “Alice in Wonderland,” and three of the “Pirates of the Caribbean” films. It’s the 55th film to reach the milestone.

Domestically, “Aladdin” opened in first over the Memorial Day weekend with $117 million and has shown impressive holding power with $313 million after seven weeks.

“Aladdin” easily outperformed Disney’s pre-opening domestic projections, which were in the $75 million to $85 million range for the four days — and underlined the validity of the studio’s strategy of rebooting its animated classics such as “Beauty and the Beast” and “The Jungle Book.” In this case, it remade the original 1992 animated movie with Mena Massoud as Aladdin, Will Smith as the Genie, Naomi Scott as Jasmine and Marwan Kenzari as Jafar. Guy Ritchie directed. Rideback’s Dan Lin and Jonathan Eirich produced.

Internationally, the film opened in first in nearly all markets and has topped $584 million. Japan is the best international performer with $72 million, followed by South Korea with $63 million, China with $53 million, the UK with $43 million and Mexico with $32 million.