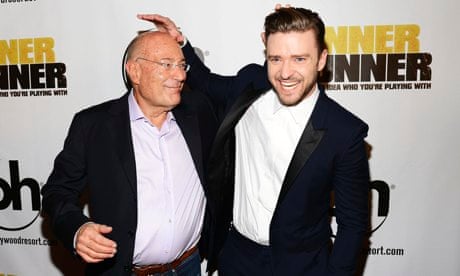 Hollywood producer gives interview in which he confirms earlier claims that he was an arms dealer.

The Hollywood producer behind box office hits including Fight Club, Pretty Woman and LA Confidential has spoken about his life as an Israeli secret agent and arms dealer, saying he was proud of working for his country.

Arnon Milchan gave a lengthy interview to the Israeli documentary programme Uvda, broadcast on Monday on Channel 2, confirming claims made earlier in an unauthorised biography that he worked for an Israeli agency that negotiated arms deals and supported Israel’s secret nuclear weapons project.

Milchan, who was born in Israel, was recruited as a young businessman to the Bureau of Scientific Relations – known by its Hebrew acronym, Lakam – by Shimon Peres, now Israel’s president, in the 1960s. The bureau, which worked to obtain scientific and technical information for secret defence programmes, closed in 1987.

Milchan, 68, is the chairman of New Regency Productions, which has produced more than 120 Hollywood movies since the 1970s, working with actors and directors such as Robert de Niro, Martin Scorsese, Roman Polanski, Oliver Stone, Russell Crowe and Ben Affleck.

During the programme Milchan said: “Do you know what it’s like to be a 20-something-year-old kid [and] his country lets him be James Bond? Wow! The action! That was exciting.”

At the peak of his activities he was operating 30 companies in 17 countries and brokering deals worth hundreds of millions of dollars, according to the programme.

But, Milchan said, it was a challenge to overcome his reputation as an arms dealer. “In Hollywood, they don’t like working with an arms dealer, ideologically … with someone who lives off selling machine guns and killing. Instead of someone talking to me about a script, I had to spend half an hour explaining that I’m not an arms dealer. If people knew how many times I risked my life, back and forth, again and again, for my country.”

He should have foreseen the difficulties and been more robust about disapproval, he added. “I should have been aware of that, of what I’ll go through, and said, ‘Fuck you. You know what? I did it for my country, and I’m proud of it.'”

In Hollywood, he said, he detached himself from “physical activities” in order to devote himself to film-making. However, he claimed to have used connections to promote the apartheid regime in South Africa in exchange for it helping Israel acquire uranium.

Milchan, who has a degree from the London School of Economics, was estimated earlier this year to have a net worth of $4.2bn (£2.6bn).

Peres, who has been Israel’s president since 2007 and was the architect of Israel’s nuclear weapons programme in the 1960s – which has never been officially acknowledged by the state – admitted recruiting Milchan as an agent.

“Arnon is a special man. It was I who recruited him … when I was at the ministry of defence Arnon was involved in numerous defence-related procurement activities and intelligence operations.

His strength is in making connections at the highest levels … his activities gave us a huge advantage, strategically, diplomatically and technologically,” he said in 2010, according to an interview quoted in Confidential: The Life of Secret Agent Turned Hollywood Tycoon Arnon Milchan by Meir Doron and Joseph Gelman.

In an appearance in Monday night’s programme, De Niro said he once asked Milchan about rumours concerning clandestine activities on behalf of Israel. “He told me that he was an Israeli and that of course he would do these things for his country,” the actor-director said.

Affleck describes Milchan as “a very mysterious, exotic figure in Hollywood”, adding that he did not know the truth of the rumours about the producer.

According to Ilana Dayan, the investigative journalist who made the programme, Milchan has no second thoughts about his role as an Israeli secret agent and arms dealer.

“He made up his mind that he wanted to speak out about he did for the state of Israel – even if he pays a cost in Hollywood, he wants recognition here in Israel,” she told the Guardian.

“He’s very proud of what he did – but I’m sure I don’t know everything.”

Dayan first contacted Milchan around three years ago, when he declined to be interviewed. Then he consented to be interviewed about his career as a Hollywood producer “but said he would say nothing about the other stuff”. Finally – “gradually” – he agreed to talk about his service for the state of Israel.