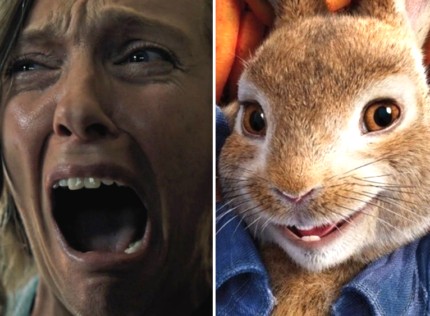 “Parents were yelling at the projectionist to stop, covering their kids’ eyes and ears,” an audience member tells The Sydney Morning Herald.

The families who turned out for an April 25 screening of Sony’s “Peter Rabbit” at Event Cinemas in Innaloo, Western Australia got a terrifying surprise when the trailer for A24’s R-rated horror movie “Hereditary” played before the PG-rated family movie. According to a report in The Sydney Morning Herald, the “Hereditary” preview was accidentally shown to family audiences and created a small panic in the theater.

“It was dreadful. Very quickly you could tell this was not a kid’s film,” an audience member named Jane told the newspaper. “Parents were yelling at the projectionist to stop, covering their kids’ eyes and ears. A few went out to get a staff member but she was overwhelmed and didn’t really know what to do. Some parents fled the cinema with their kids in tow.”

The theater eventually shut the screen off and offered every audience member a complimentary movie pass to apologize for the mistake. A spokesman for Event Cinema’s parent company Event Hospitality & Entertainment Limited said the issue is being “investigated internally to ensure situations like this do not occur again.”

“As soon as the staff onsite were made aware of the situation yesterday, the trailers were taken off-screen immediately and all patrons were given complimentary tickets as a gesture of goodwill,” the spokesperson said.

The “Hereditary” trailer, which IndieWire deemed one of the year’s scariest earlier this year, not only touts the film as this generation’s “The Exorcist,” but also includes such horrifying imagery as a body burning on fire and a teenager smashing his head into his desk until his face is bloodied.

“A lot of the kids were upset,” the audience member said. “If you think back to your own childhood you remember things that scared you when you saw them for the first time. I still remember the first time I saw a robber on TV.”