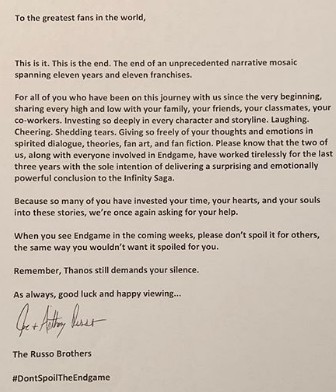 A man who obviously didn’t get the memo on Avengers: Endgame — or chose to ignore it — was beaten outside a Hong Kong cinema for shouting out spoilers to fans waiting in line to see the film.

Taiwanese media said the man, who was not identified, was left bloodied outside a cinema in Causeway Bay, after watching the movie.

A photo of the purported victim circulated online and shows him sitting on the street with blood coming from his head.

The incident recalls a Season 3 flashback episode of The Simpsons in which Homer Simpson blurts out the ultimate Star Wars spoiler about Luke Skywalker’s lineage to people lined up to see The Empire Strikes Back after he watched it.

Earlier, an open letter was shared on Instagram by Marvel Studios filmmakers Joe and Anthony Russo in the hours after some leaked footage and images from Avengers: Endgame was shared online. The Russos pleaded with early-screening audiences to be reticent regarding major plot points. “When you see Endgame in the coming weeks, please don’t spoil it for others, the same way you wouldn’t want it spoiled for you,” the Russos said in the joint statement.