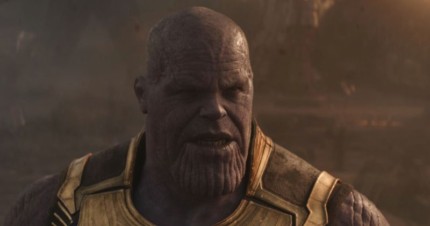 Anyone hoping Josh Brolin might break into the Best Supporting Actor race will be surely disappointed.

Disney is aggressively pushing “Black Panther” for numerous Oscar nominations this awards season, and not even Thanos is going to get in the way of the plan. The studio has launched its official 2018 For Your Consideration website, which includes a surprising confirmation that “Infinity War” is only being campaigned in the Best Visual Effects category. The plan takes “Infinity War” out of the running in numerous crafts categories and means Josh Brolin’s acclaimed supporting turn as Thanos will not be submitted for consideration.

While “Avengers: Infinity War” was never going to be in the conversation for major awards like Best Picture and Best Director, numerous Marvel fans and some awards prognosticators had wondered whether or not Brolin could break into the Best Supporting Actress race. The actor, a previous nominee in the category for “Milk,” earned acclaim for his villainous role in the film, with many critics crediting Brolin for fixing the Marvel Cinematic Universe’s villain problem. Gold Derby’s Jacob Sarkisian wrote in September the acclaim for Brolin could make him a game-changing contender.

The biggest obstacle standing in Brolin’s way was that Thanos is a motion-capture performance. The Academy has never nominated a motion-capture role for an Oscar, despite worthy work from Andy Serkis in the “Planet of the Apes” trilogy. While Brolin is not being campaigned for an acting Oscar, expect Disney to use the motion-capture work on Thanos as the basis for their Best Visual Effects campaign for “Infinity War.”

While it may be surprising to hear Disney is only campaigning “Infinity War” for one Oscar (the film easily could’ve been considered for sound categories), it makes sense given the fact “Black Panther” is being viewed as a much stronger contender across the board, including for Best Picture. Disney’s FYC website has “Black Panther” being campaigned for 16 categories. The company is pushing seven actors for Best Supporting Actor alone, with Michael B. Jordan being a leading contender for a nomination.

Although Disney is campaigning other films like “Mary Poppins Returns” and “Incredibles 2” in the same categories as “Black Panther,” none are Marvel superhero movies. Disney did not answer IndieWire’s request for comment, but it appears the studio doesn’t want to split potential votes between two Marvel movies this year. The company has campaigned multiple superhero movies for the same awards in the past (see “Thor: Ragnarok” and “Guardians of the Galaxy Vol. 2” in 2017), but it’s taking a different route now that “Black Panther” actually has serious awards momentum. Just last week, Lucasfilm head Kathleen Kennedy hosted a screening of “Black Panther” with Ryan Coogler, Kevin Feige, and more, so it’s clear the film is Disney’s crown jewel this Oscar season.