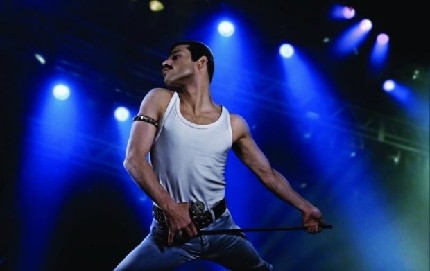 The Golden Globe winner is getting sing-along screenings at more than 750 North American locations beginning on Friday.

The sing-along version will display song lyrics on screen, allowing viewers to perform the movie’s score. The tracks include Queen’s “We Will Rock You,” “We Are the Champions,” “Crazy Little Thing Called Love,” “Another One Bites the Dust,” and the title song.

“Bohemian Rhapsody” will jump from its current 1,080 domestic locations to more than 1,300 this weekend, following its Golden Globe wins for best drama and best actor in a drama (Rami Malek). The film has been a massive success, grossing $194 million domestically and another $549 million internationally following its launch in early November.

“We are delighted to give audiences the opportunity to see this outstanding Golden Globe-winning film featuring Rami Malek’s amazing Golden Globe-winning performance in theaters all over the U.S. and Canada in both its original form and in a never-before-experienced ‘sing-along’ version,” Fox president of domestic distribution Chris Aronson said.

Fox held sing-along screenings last year for its Hugh Jackman musical “The Greatest Showman,” and those showings drew well in the U.K. The movie’s “This Is Me” received an Academy Award nomination for Benj Pasek and Justin Paul.