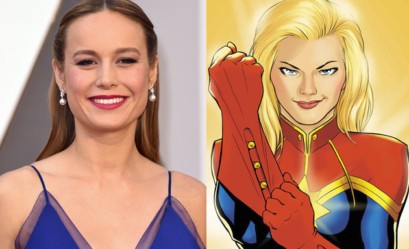 Captain Marvel, Paramount’s Island Plaza & the Roland Emmerich-helmed Midway are among the big-budget big-screen projects that scored big bucks from the Golden State today as the California Film Commission announced the latest tax credits recipients. One of eight movies awarded the incentives in this round, the Brie Larson-starrer with Samuel L. Jackson will receive just more than $20.7 million in credits, making Captain Marvel the first Marvel movie primarily produced in California since 2014’s Captain America: The Winter Soldier.

Coming off a San Diego Comic-Con weekend where Warner Bros and Disney/Marvel flexed serious franchise superhero muscle with presentations for the upcoming Justice League, Ready Player One, the latest Thor and Avengers pics and Black Panther, Monday’s disclosure by the state agency on behalf of the annual $330 million program saw $68 million available for this round. A total of 92 projects applied, says the CFC.

Here is the list of selected projects and independent films, along with their credit allocation:

“Our headquarters and postproduction facilities are in California, so it’s very exciting to be able to film Captain Marvel here in our home state thanks to this California tax credit,” said Marvel Studios co-president Louis D’Esposito today. “As a result, not only will we be able to streamline our production process for this and other films we’re working on concurrently, but we’ll have more time to spend with our families.”

Back in April, Marvel boss Kevin Feige told Deadline the company would “love to make movies here” but tax incentives played a “big part” in why they went to states like Georgia for their films. Guess someone in Sacramento heard that loud and clear.

Under the California Film and Television tax credit program, which more than tripled in 2014, studios and producers were able to apply for the incentives unveiled today from June 19-26. With movies budgeted at over $75 million now eligible the past three years for the program, the next big-screen application round runs October 16-20, while TV projects can make their pitch from November 6-13.

Spreading the wealth, CFC says more than 50% of the eight projects announced today plan on filming outside Los Angeles’ 30-mile zone. With job creation a big part of the restructuring and refinancing of the incentives program in 2014, the CFC also estimates the eight pics will employ more than 2600 cast and crews all together and put out almost $385 million in qualified spending. The latter category is formally defined as “wages to below-the-line workers and payments for equipment/vendors” — which translates to middle class jobs and benefiting small businesses.

Last month saw the second seasons of NBC’s This Is Us and Timeless and CBS’ upcoming S.W.A.T. revival among those awarded tax credits in the latest television round. That period had $51 million available for recurring series and $25 million for relocating series — the latter being a top priority in recent years for the program’s efforts to bring production back to the state

With today’s announcement, the state must be feeling pretty marvelous in that regard (couldn’t resist).