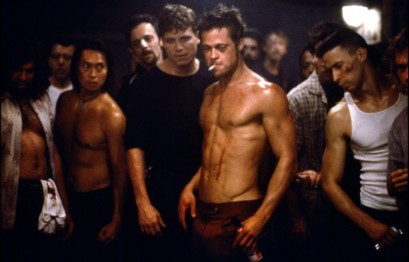 “Fight Club” presented Fincher with numerous challenges both during and after production.

David Fincher’s “Fight Club” has become one of his most iconic and quotable movies, but that was hardly the case when the film opened in theaters 20 years ago. Author Brian Raftery takes a behind-the-scenes look at the tumultuous making of the Chuck Palahniuk adaptation in the new book “How 1999 Blew Up the Screen,” an excerpt from which is now available to read on The Ringer. Fox 2000 executive Laura Ziskin optioned Palahniuk’s novel for $10,000 and originally courted David O. Russell to direct. Russell read “Fight Club” and passed because he just didn’t understand it. Fincher, meanwhile, was instantly attracted to the story.

“I was in my late thirties, and I saw that book as a rallying cry,” Fincher told Raftery. “Chuck was talking about a very specific kind of anger that was engendered by a kind of malaise: ‘We’ve been inert so long, we need to sprint into our next evolution of ourselves.’ And it was easy to get swept away in just the sheer juiciness of it.”

In order to direct the movie, Fincher had to get over his past relationship with 20th Century Fox. The director had notoriously clashed with the studio on his directorial debut, “Alien 3.” Fincher went to Fox and presented the only two options he felt a “Fight Club” adaptation could go: Make a low-budget $3 million movie on videotape or go with a big budget and big stars. Fincher eyed the latter choice and called it an “act of sedition.” Fox was intrigued and gave Fincher time to put together a script.

“We were making a satire,” Fincher said. “We were saying, ‘This is as serious about blowing up buildings as ‘The Graduate’ is about fucking your mom’s friend.’”

Fox went ahead with the script Fincher planned with screenwriter Jim Uhls. Having directed Brad Pitt already in the serial killer drama “Se7en,” all Fincher had to do was convince the actor to read the script during the making of “Meet Joe Black” in order to get him to sign on as Tyler Durden. Edward Norton caught Fincher’s eye after the director watched him in “The People vs. Larry Flynt.” Like Fincher, Norton viewed “Fight Club” as a comedy.

Just how funny “Fight Club” should be ended up being a point of contention on set between Fincher and Norton. The two men fought over the movie’s tone, often resulting in long breaks between scenes where other actors would wait around aimlessly.

“I think Edward had this idea of, ‘Let’s make sure people realize that this is a comedy,’” Fincher said. “He and I talked about this ad nauseum. There’s humor that’s obsequious, that’s saying, ‘Wink-wink, don’t worry, it’s all in good fun.’ And my whole thing was to not wink. What we want is for people to go, ‘Are they espousing this?’”

Fincher’s clashes with Norton were nothing compared to his battle with Fox over the movie’s marketing. The director was given no control over the “Fight Club” marketing. As Fincher said, “The people whose job it is to sell it were like, ‘I’m not going down with this.’” One executive at Fox told Fincher the movie was for no one. Fincher recalled being told, “Men do not want to see Brad Pitt with his shirt off. It makes them feel bad. And women don’t want to see him bloody. So I don’t know who you made this movie for.”

“When I think of 1999, I don’t think of my feet on the chair in front of me with a sixteen-ounce cup of popcorn in my hands,” the director added. “I think of it mostly as a series of meetings where I would slap myself so hard, I would leave with a calloused forehead.”

Fincher wanted to take a creative approach to the film’s marketing and directed a couple of fake PSA videos featuring Pitt and Norton. The two actors appeared in character and advised moviegoers to turn off their cell phones, adding dark and twisted lines as “no one has the right to touch you in your bathing suit area.” Fincher’s idea was to take an “in-your-face assaultive” approach to the marketing, but Fox preferred to play it safe by selling the film as a “big studio film with movie stars” and leaning into the fighting plot line by marketing “Fight Club” at wrestling events.

The marketing didn’t work and “Fight Club” was a notorious box office bomb, only opening to $11 million and tapping out at $37 million at the U.S. box office. Fox spent $65 million on the movie. Fincher had heard the movie could bomb and decided to take a vacation to Bali on opening weekend as to not pay attention to the inevitable bad news. On the poor box office returns Fincher said, “Two years of your life and you get one fax and it’s like, ‘Everybody go home. It’s going to be a fire sale.’ You do a lot of soul-searching at that moment: ‘Oh, fuck, what am I going to do now?’ How do you bounce back from that?”

“People at [the restaurant] Morton’s would pat you on the shoulders like you lost a loved one,” the director added. “The vibe [at CAA] was very much, ‘It’s good you’ve experienced this and that you understand we can sway you from making these kinds of life-altering, possibly career-destroying decisions for yourself.’ I just got up and excused myself. And later on, I had a conversation and said, ‘How dare you? I’m really okay with this movie.’”

Whatever pain Fincher dealt with during the making of “Fight Club”and its aftermath surely healed in the two decades since, as the film went on to sell over 6 million DVDs and become a cultural touchstone for a generation of young moviegoers. Head over to The Ringer to read the full “Fight Club” excerpt Brian Raftery’s “How 1999 Blew Up the Screen.”