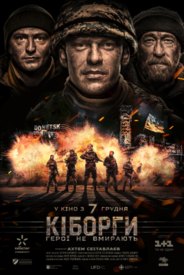 On March 30, 2018, the Ukrainian film Cyborgs: Heroes Never Die will be screened in Ankara with the participation of Minister for Foreign Affairs of Ukraine Pavlo Klimkin, Commissioner of the President of Ukraine for the Affairs of Crimean Tatars Mustafa Dzhemilev, First Deputy Minister for Information Policy of Ukraine Emine Dzhaparova, member of the Ukrainian parliament Mariia Ionova and film director Akhtem Seitablayev as well as other high-level Ukrainian and Turkish officials.

Showing a few weeks in the midst of the battle for Donetsk airport which lasted 242 days, Cyborgs tells a story about present-day heroes who create a new Ukraine.

Despite the difference in origin and age, the defenders had one common goal to protect their native land from the aggressor. For this, they are ready to die.

The events at Donetsk airport left an indelible mark on Ukrainian national consciousness and the battle is associated both with pride and pain.

The film Cyborgs was released on December 6 and broke national ticket sales records in Ukraine over the first weekend of its screening.