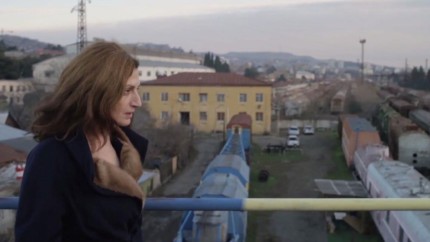 The vast, largely unmapped terrain of a middle-aged mom’s creative life gets a witchily weird, uncompromisingly assured showcase in Georgian director Ana Urushadze’s exhilaratingly offbeat oddity. Premiering in Locarno, awarded in Sarajevo and now playing in competition at the 54th Antalya Film Festival, “Scary Mother” is also Georgia’s Oscar submission for the foreign language film category. And though its cerebral chilliness, emotional remove and narrative abstruseness might make it a hard sell in that context (Urushadze is perhaps unlikely to get quite as far as her father, Zaza, did with 2013’s Oscar-nominated “Tangerines”), this is nevertheless a startling debut that wholly earns its place as standard-bearer for one of the most exciting and distinctive national cinemas to have emerged in recent years.

Gradually the film’s narrative beats of crisis, rebirth and creative obsession emerge as a meta-fiction in which the protagonist’s journey suggests a witty parallel to that of Urushadze herself; as a Georgian woman, and a first-time feature filmmaker, presumably she has contended with issues similar to those facing her main character, a 50 year-old family woman in the throes of completing her first novel and living amid the poured concrete apartment blocks of dystopian-brutalist suburban Tbilisi.

The novelist is Manana, rivetingly played by Nata Murvanidze, whose entire demeanor can shift from frightened and insular to hawklike and predatory in an instant. As the film begins, Manana has for some time been in self-imposed exile from her family, despite being under the same roof, holed up writing her novel in a blue-accented bedroom (Mindia Esadze’s cinematography is usually low-contrast and understated but the occasional use of bold color-coding is an intriguing visual flourish). “I miss my mother,” says her daughter, Dea (Anastasia Chanturaia), drily. “I miss your mother too,” replies her father, Manana’s husband, Anri (Dimitri Tatishvili). Still, he indulges Manana’s literary ambitions, even sleeping on a temporary bed so she has an inviolate writing space, and if he paternalistically berates her for letting herself go — her hair is unkempt, her clothes shapeless and her arms covered with notes scribbled in ink — it is always gently. Until, that is, Manana, egged on by Nukri (Ramaz Ioseliani), her oddball friend and “editor” (actually the owner of a nearby stationery shop), shares her “masterpiece” with her family.

Nervously reading from her manuscript in a breathless high-speed monotone, Manana reveals that her novel is a Joycean stream-of-consciousness in which a first-person narrator looses ribbons of invective against people analogous to Manana’s real family and details pornographic encounters with neighbors and acquaintances. Her family is horrified, despite her increasingly unconvincing assurances that it’s not autobiography (“I imagined an unhappy woman in my place” she tells Anri). Soon she leaves the apartment altogether, moving into a red-lit backroom in Nukri’s store while she searches for an ending.

Manana’s grip on reality starts to slip, or is it simply that a new, weirder reality starts to intrude? She dreams she’s a Manananggal, a mythical creature of Filipino lore that’s torn into two pieces — one human, one monstrous bird-creature that emits a clicking noise when on the hunt — which accounts for the staticky noises worked into Nika Pasuri’s cleverly minimalist, ominous score. Meanwhile Manana’s translator father Jarji (Avtandil Makharadze) becomes obsessed by the text without knowing the identity of its author, leading to a climactic scene between the two which, with dizzying loop-the-loop skill, brings the narrative back in on itself in unexpectedly intricate ways.

Audiences are used to seeing stories about the ungovernable, all-consuming creative urge — indeed, alongside Darren Aronofsky’s “Mother!,” Urushadze’s film suggests that 2017 might be something of a banner year for disturbingly wry evocations of the monstrously self-interested, semi-cannibalistic creative ego. But these accounts usually locate that lofty artistic instinct within men, who are seduced away from their families and responsibilities by capricious muses that instill in them an implacable sense of the Importance of their work. To see that self-centeredness embodied by a middle-aged, middle-class wife and mother of three is refreshingly subversive.

Women often combat patriarchal oppression through bargaining and reassurance, pretending that freedom, once granted, will not be used to undermine existing institutions and priorities. But Urushadze’s admittedly uneven, cool-to-the-touch “Scary Mother” is thrillingly unconcerned with that kind of politeness: Instead it suggests that truly self-expressive freedom cannot be a partial concept; it is absolute and it includes within it the freedom, seized on by the monomaniacal Manana, to become whatever the truest version of yourself might be, even if it’s a bat-winged monster who devours children and is willing to sacrifice anything and anyone to its insatiable appetite.