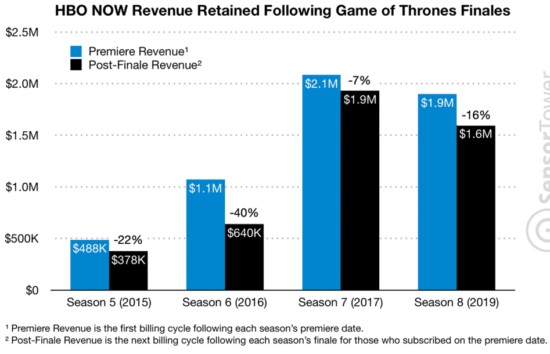 Ever since the “Game of Thrones” finale, industry insiders have been wondering: Will HBO be able to hold onto its subscribers without its biggest show? It’s still too early to draw a definitive conclusion about the fate of the network in this post-“Thrones” era, but new data suggests that most subscribers are sticking with the service, even without the dragons.

To get a sense of HBO’s fate, app analytics specialist Sensor Tower gauged whether people who subscribed to its HBO Now streaming service for the final season of “Game of Thrones” were ditching the service as soon as the show was over. The data, which Sensor Tower exclusively shared with Variety this week, shows that HBO was able to hold onto 84% of the revenue from those new subscribers at the first billing cycle after the finale.

There are a number of caveats to note about this data: First, these are just estimates based on app store performance data. Second, Sensor Tower is only able to look at a small slice of HBO’s overall audience — HBO Now subscribers who use Google or Apple as their billing providers.

HBO Now is also available via Amazon and Roku as well as directly through HBO’s website. HBO also sells digital subscriptions via Amazon, Hulu and other providers, and the network can obviously be ordered through traditional TV providers as well.

Still, the data does give us a first window into HBO’s performance after the “Game of Thrones” finale, suggesting that the network’s bet to keep subscribers hooked with shows like “Chernobyl” is paying off. Plus, fans have a number of “Game of Thrones” spinoff series to look forward to, including one starring Naomi Watts that received a pilot order last year. We may get some first clues when HBO owner AT&T reports Q2 earnings on July 24, but HBO isn’t expected to report subscriber updates until the end of the year.