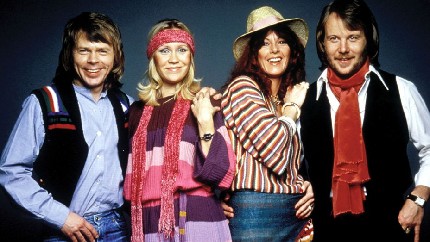 As the ‘Mamma Mia!’ sequel gets ready to hit theaters, Lasse Hallstrom looks back on his time directing a hybrid documentary/concert movie called ‘ABBA: The Movie.’

Mamma Mia! Here We Go Again, out July 20, is the latest film based on the Swedish pop group ABBA, whose history of turning music into musicals dates to 1977’s ABBA: The Movie. The group had formed in 1972, with its name consisting of the first letter of each member’s name: Anni-Frid Lyngstad, now 72; Benny Andersson, 71; Bjorn Ulvaeus, 73; and Agnetha Faltskog, 68. The quartet’s big breakthrough came in 1974 when it won the Eurovision Song Contest.

Another big break was that the band had an unusually talented 27-year-old shooting its videos — a filmmaker who went on to receive Oscar directing nominations for 1987’s My Life as a Dog and 1999’s The Cider House Rules. “I had been doing their videos and covering their concerts since 1974,” says Lasse Hallstrom, now 72, in a call from Sweden. “They were done on a really low budget, and sometimes we’d have to shoot two a day in my apartment.”

ABBA: The Movie began on a five-week 1977 tour of Australia. “My videos had been shown over and over on Australian TV,” says Hallstrom. “The promoters wanted a documentary, and at the last minute it went from 16mm to 32mm.”

The plot was conceived as a way to string together the concert footage: A trainee radio DJ must arrange an interview with ABBA or he’ll be fired. He chases the group around Australia and lands the scoop at the last second. “An Australian screenwriter met us when we were changing planes in Singapore, and we spent the next eight hours to Sydney working on the script,” continues Hallstrom. “We came up with a strange hybrid between a documentary and concert movie that was scripted but open to last-minute ideas.”

THR on Feb. 28, 1979, reported that Warner Bros. had set March 16 as the date for a Canadian theatrical release that “may edge into the U.S. as well.” There’s no evidence it did. “What the film captured is the genuine joy of the group singing,” says Hallstrom. “What survived is the freshness of these performers. The rest of it was silly.”