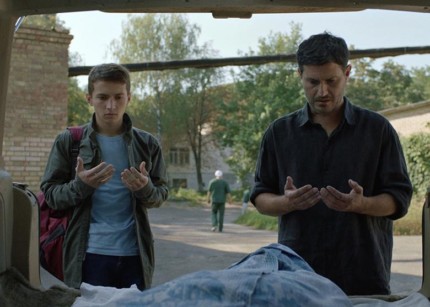 Nariman Aliev’s first feature reveals a poise and maturity beyond his years. The 26 year-old director consolidates the themes and approach of his shorts Sensiz (2016) and Seni Sevem (2014) into a thoughtful road movie illuminating the fraught fault lines in the relationship between the Ukraine and Russia. Homeward (Evgge) should attract festival and distributor attention especially among those in search of rising talent.

The premise of Homeward is simple and straightforward. Mustafa (Akhtem Seitablayev) has driven to Kyiv to claim the bullet-ridden corpse of his eldest boy Nazim. The son is a casualty of the war with Russia and all Mustafa wants is to take him home to be buried in the disputed territory of Crimea. Youngest son Alim (Remzi Bilyalov) will reluctantly accompany them.

In traditional road movie fashion what matters is not the final destination but what happens on the journey. Simmering resentment marks the relationship between Mustafa and Alim. An implacable, stony-faced figure, Mustafa cannot believe that any of his own flesh and blood would reject the life that he had planned for them on their farm in Crimea. Alim is also likely to evade his grasp. He is studying journalism in Kyiv and learning Ukrainian and clearly has no intention of returning home. “I am the only one you have,” pleads Mustafa, hoping the call of family might bridge the gap between them.

The journey unfolds in tense encounters, border patrols, petty bureaucracy and a land in which everyone seems to regard each other with suspicion. There appears to be no common ground or space where mutual respect and understanding could flourish. The events alternately divide and unite a father and son both dealing with grief and wary of each other. When Mustafa tries to teach Alim how to defend himself in a knife attack there is a real sense of bonding. When Mustafa resolutely refuses to let Nazim’s wife attend the funeral, it places another obstacle between them.

Akhtem Seitablayev manages to generate sympathy for Mustafa; his resolute stares and clenched jaw showing the strain on a man who has set himself a task that will be fulfilled regardless of the cost. The little outbursts of anger and defiance from Remzi Bilyalov’s Alim nicely shade the sense of love and hate that mark his feelings for his father.

One of the most impressive aspects of Homeward is the cinematography of Anton Fursa who picks out faces bathed in striking sunlight or captures painterly compositions of timeless rural landscapes. The lingering visions of a setting sun on the distant horizon, a misty morning, vast empty fields and quiet flowing rivers underline the natural beauty of the region and the calm that is found such a short distance from conflict. Fursa’s work really underlines the importance of homeland to Mustafa.

Family is also essential to the character. During the journey, relatives are visited, graves are tended and a weary, heartfelt declaration is made that: “Crimea is our Jerusalem as grandpa used to say.”

The attention given to the look of the film and the poised, reflective tone bring to mind the cinema of Nuri Bilge Ceylan and further emphasises that Narim Aliev is a talent to watch.