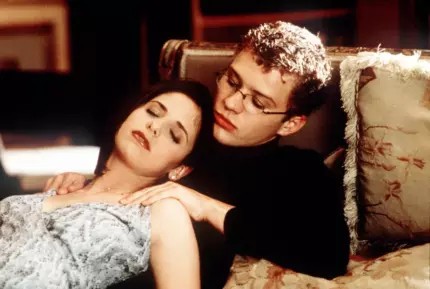 Twenty years after its release, the seduction drama still drips with sex — and a far more radical view of it than we realized at the time.

I remember it as if it were yesterday: the pastoral picnic setting, the thinly veiled faux innocence, the gentle yet confident lean in, the twenty seconds of tongue that felt like an eternity, and of course — who could forget? — the tiny, tasteful, string of spit that meant I could finally stop holding my breath.

The kiss in “Cruel Intentions” (there were a few, but only one “the kiss”) is the definitive example of the male gaze’s lesbian fantasy; a uniquely Hollywood phenomenon whereby two otherwise heterosexual girls make out, usually slobbering in an extreme close-up. The two characters don’t exhibit any earnest desire for one another, they do not claim or even mention a lesbian or queer identity, they are usually hyper-feminine, and the scene is always ultimately for the pleasure of a man. Remnants of the kiss in “Cruel Intentions” — performed with laudable commitment by top teen idols of the day Sarah Michelle Gellar and Selma Blair — can be found in nearly every negative representation of lesbians in film and TV today.

As a twelve-year-old tomboy growing up in small town Vermont, I loved every second.

Celebrating its 20th anniversary with a theatrical re-release later this month, “Cruel Intentions” is merely one of an illustrious line of adaptations of the 1782 novel “Les Liaisons dangereuses,” which include plays, operas, ballets, and films directed by Roger Vadim, Stephen Frears, and Miloš Forman. The decidedly less highbrow Roger Kumble directed this 1999 version, which transported the salacious action from 18th century France to an uber wealthy New York City prep school. (In many ways, it presaged “Gossip Girl,” but that’s another story).

The story follows a bet between two rival step-siblings, Sebastian (Ryan Philippe) and Kathryn (Gellar), over the seduction of the new headmaster’s daughter (Reese Witherspoon). If Sebastian succeeds, Kathryn promises that “he can put it anywhere.” Meanwhile, Kathryn takes revenge on her ex-boyfriend by meddling in the affairs of his new squeeze Cecile (Blair), exerting a domineering big sisterly interest in her sexual development. Enter the picnic scene.

“Haven’t you ever practiced on one of your girlfriends?,” Kathryn asks Cecile when she says she’s never been to first base. The two are costumed as polar opposites: Cecile in plaid mini-skirt and pastels, Kathryn’s sleek black ensemble topped with wide-brimmed hat and Jackie O. sunglasses.

“It’s not gross, how else do you think girls learn?,” says Kathryn, assuring everyone that nothing too gay is about to happen. After an initial innocent kiss, Kathryn delivers a line so provocative, so deceptively simple in its sultriness, it’s almost too hot to transcribe:

“Let’s try it again. Only this time, I’m gonna stick my tongue in your mouth. And when I do that, I want you to massage my tongue with yours. And that’s what first base is.”

I sat perfectly still in the two-screen movie theater of my childhood during the kiss that followed, heart racing, hoping if I didn’t breathe the people next to me wouldn’t notice me squirming in my seat. It was one of those moments in every queer person’s life that remain indelibly etched in the memory, where the voice of divine wisdom rears its hallowed head to remind you what it has whispered many times before and will likely whisper many times again: “You’re really fucking gay.”

As I revisited “Cruel Intentions” over the years (too many times, too late at night), I looked beyond the kissing scene (after a few rewinds) and realized that the whole movie is utterly soaked in sexuality. Not just the standard Hollywood sexuality; this was an alternative — some might even say perverted — sexuality. Kathryn and Sebastian’s forbidden lust is borderline incestuous, which may explain the bizarre preponderance of so-called step-sister porn; Cecille is an A-class caricature of an innocent virgin right out of a daddy role play, a formerly taboo kink term that has become so ubiquitous as to describe everyone from Idris Elba to Yorgos Lanthimos; and one can hear Kathryn’s soliloquy about slut-shaming echoed in the chants of Amber Rose’s annual SlutWalk. (“God forbid I exude confidence and enjoy sex”).