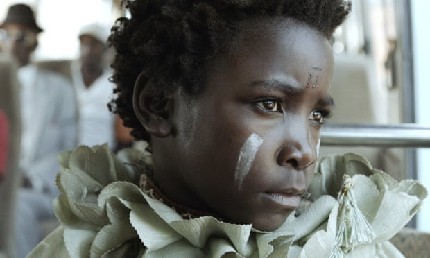 In a remote Zambian village, a nine-year-old girl (Margaret Mulubwa) is accused of being a witch and given a stark choice: to accept her supernatural branding and live a tethered life as a sorceress, or to cut her ties with local tradition and be transformed into a goat that may be killed and eaten for supper. Thus begins this bewilderingly strange yet terrifically sure-footed feature debut from writer-director Rungano Nyoni. Born in Zambia and part-raised in Wales, Nyoni first made international waves with such award-winning shorts as Mwansa the Great (2011) and Listen (2014). Now, this daringly satirical parable of magic and misogyny, superstition and social strictures confirms her promise as a film-maker of fiercely independent vision, with a bright future ahead.

Unsurprisingly opting to embrace her supernatural status, the young heroine of I Am Not a Witch is sent to the local “witch camp”, an enslaved tourist attraction. Here, the women offer a sense of community and protection to the all-but-silent newcomer, whom they name Shula (“it means ‘to be uprooted’”). But when government official Mr Banda (Henry BJ Phiri) declares that “you are my little witch now”, a strange form of celebrity looms. Soon, Shula is being paraded around local courts and TV stations, dispensing divine justice and hawking magical eggs – all for the profit of her garrulous keeper. “What if she’s actually just a child?” asks the presenter of the Smooth Talk chatshow, a question that is met with stony silence from her “state guardian”.

Nyoni was apparently inspired by real-life reports of witchcraft accusations in Zambia, and her research took her to Ghana, where she became the first foreigner to sleep in one of the world’s oldest “witch camps”. Here, she observed first hand the daily rituals of these women whose fates have been sealed by “nothing more than hearsay”. Yet for all its factual grounding, I Am Not a Witch is also a work of fairytale invention, unravelling the threads of its quasi-mythical narrative with anarchic aplomb. In particular, the motif of women restrained from flight by vast lengths of white ribbon has a touch of Charles Perrault or the brothers Grimm – a magical-realist conceit that brilliantly dramatises the down-to-earth reality of the ties that bind.

There’s a hint of the absurdist tragicomedy of Yorgos Lanthimos’s The Lobster too, as Shula faces a Kafkaesque choice between enforced conformity and metamorphosis. Brilliantly, Nyoni keeps her audience wondering whether they’re meant (or allowed?) to laugh or cry at this insane predicament, juxtaposing scenes of poignant despair with sociopolitical existential slapstick. Early accusations of witchcraft have an almost Pythonesque quality, while a sequence in which a show trial is interrupted by a mobile phone is pure farce. Fans of Chilean surrealist Alejandro Jodorowsky will warm to a streak of deadpan humour that is drier than the arid plains upon which Shula dances to summon the rain.

Having worked monochrome miracles on Ciro Guerra’s Amazon odyssey Embrace of the Serpent, cinematographer David Gallego here conjures a kaleidoscope of arresting tableaux: lonely Shula listening through a blue horn to the distant laughter of schoolchildren carried on the wind; a huge orange truck with women tied to outstretched reels, like some mobile fairground ride; the open mouth of a giant head looming towards us, while a frightened child huddles within. These images are hauntingly composed and dreamily sustained, the length of the shots heightening comedy and tragedy alike, with heartbreaking results. Meanwhile, music cues swerve from Vivaldi to Estelle, keeping the audience on edge and uneasy.

At the centre of it all is a group of nonprofessional players, led by young Margaret Mulubwa, who was discovered during a location recce in Luapula Province. And what a discovery she is! With a face that can transform from innocence to defiance in an instant, Mulubwa is a mesmerising screen presence, her stoical countenance broken occasionally by a radiant smile that lights up the landscape.

As for Nyoni, her ability to blend cruel humour, pointed satire and empathetic anger to produce something touched by tragic transcendence is astonishing. In interviews, she has described watching Michael Haneke movies as “my film school” (perhaps those white ribbons are a homage?). Yet she has also talked enthusiastically about her love of the witchy 1996 teen fantasy The Craft. With such wide-ranging influences, who knows what this remarkable film-maker will do next? Having been spellbound by her audacious first feature, I can’t wait to find out.