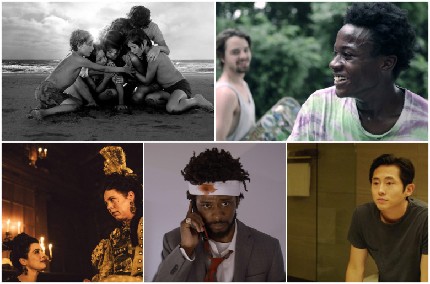 2018 Critics Poll: The Best Films and Performances According to Over 200 Critics From Around the World

Year-end buzz is often hijacked by noisy awards campaigns, but sometimes, it syncs up with critical consensus. That seems to be the case with “Roma,” Alfonso Cuarón’s nuanced ode to the domestic worker in his Mexican household in the 1970s. After winning multiple prizes from critics groups and topping numerous top 10 lists, “Roma” has received the most definitive endorsement from critics yet, by topping IndieWire’s year-end critics poll in the Best Film, Best Director, Best Foreign Film, and Best Cinematography categories.

The thirteenth edition of the survey presents an exhaustive overview of critical favorites, with a record-high of 232 critics voting from 32 countries, making it the largest survey of its kind. The outcome illustrates the sheer range of films celebrated by critics in 2018. While Cuarón dominated the film and director categories, Paul Schrader’s “First Reformed” received significant support that landed it in the second-place slot, while Lee Chang-dong scored second place as Best Director for his Korean Oscar submission “Burning,” which critics have been championing since its Cannes debut.

Both movies managed to top major categories for their performances, with “First Reformed” star Ethan Hawke winning Best Actor for his performance as an ideologically conflicted priest, and Steven Yeun winning Best Supporting Actor for his surprising turn as a confident man of mystery in “Burning.”

Critics didn’t forget about Yorgos Lanthimos’ dark regal comedy “The Favourite,” either. The twisted British crowdpleaser marked the first time that the Greek auteur worked with another screenwriter, and the result won the Best Screenplay category in IndieWire’s survey. (Originally written by Deborah Davis and reworked by Tony McNamara, the script for “The Favourite” landed just a few points ahead of “First Reformed.”) “The Favourite” also scored a Best Actress win for queen Olivia Colman (just ahead of “Roma” breakout Yalitza Aparicio), as well as a Best Supporting Actress win for Rachel Weisz, as the scheming assistant chasing Colman’s affection.

The Sundance Film Festival was a launchpad for several winners in the critics poll. Boots Riley’s wacky anti-capitalist satire “Sorry to Bother You” won the Best First Feature category, nearly a year after it became a Sundance sensation, and it squeaked ahead of Bo Burnham’s own Sundance debut, coming-of-age dramedy “Eighth Grade,” which came in second place. Sundance also launched “Minding the Gap,” newcomer Bing Liu’s touching look at his troubled family and his skateboarding community, to rave reviews. It won the survey’s Best Documentary prize.

While “Roma” continued its winning streak in the Best Foreign Language category, critics showed strong support for “Burning,” which came in second place. And while Cuarón received over 40% of the vote for Best Cinematography, second place went to another black-and-white period drama, “Cold War.”

Throughout the poll, many of the most beloved movies of 2018 managed to win in major categories, but the survey also urged critics to single out some underdogs with the Best Undistributed Films category. To qualify for this category, a movie must have screened for the first time in 2018 (at a festival or otherwise) but to date not have a U.S. distribution deal. Khalik Allah’s complex meditation on Jamaican identity, “Black Mother,” topped the list after it premiered at the True/False documentary film festival and received further acclaim at New Directors/New Films. Other undistributed highlights of the year singled out in this category include Sergei Loznitza’s “Donbass,” which premiered at Cannes, and Jodie Mack’s avant garde “The Grand Bizarre.”

Critics were also invited to share their enthusiasm for the year ahead by voting on the best 2019 release they had already seen. Claire Denis’ heady space odyssey “High Life,” which stars an incarcerated Robert Pattinson, topped the list following its successful fall season launch, when it landed distribution with A24.

As usual with this survey, the movies that won the most support in any given category only tell part of the story. Readers are encouraged to explore each list to experience the story of the movies in 2018, and treat it as a viewing guide over the holidays.

Some readers are partial to perusing individual critics’ ballots. Unfortunately, the current poll design does not allow us to display these results. However, the full list of participating critics is available, and we’re encouraging participants to share their ballots on Twitter using the hashtag #IWCriticsPoll.

Note: “First Reformed” ultimately placed higher in this ranking, even though it received fewer first place votes than “Burning,” because it had more second, third, fourth, and fifth place votes. The same math applies to why “Zama” received more first-place votes than “The Favourite,” “Cold War,” “Shoplifters” and “BlacKkKlansman.”

Note: Lynne Ramsay and Yorgos Lanthimos ultimately placed higher in this ranking, even though they received fewer first place votes than Paul Schrader, because they had more second, third, fourth, and fifth place votes.