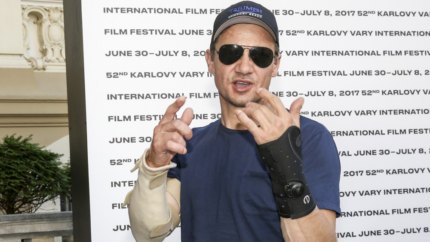 Jeremy Renner’s injuries suffered while filming the New Line comedy Tag won’t impact his shooting schedule on Disney/Marvel’s The Avengers: Infinity War. The actor showed up in a pair of arm braces to the Karlovy Vary International Film Festival in the Czech Republic this week to support his latest pic Wind River, which is playing there.

The two-time Oscar nominee fractured his right arm and left wrist in the on-set accident a couple of weeks ago; his shooting schedule had to be adjusted slightly, we hear, but production wasn’t impacted, helped by the fact that Tag is an ensemble pic. He stars alongside Ed Helms, Jake Johnson, Hannibal Buress, Jon Hamm and Annabelle Wallis in the movie based on a true story about a group of friends who have been playing a no-holds-barred version of the children’s game for the past 30 years. Warner Bros has set a June 29, 2018, release date.

Renner of course plays Hawkeye in the Marvel Universe of pics, the latest of which, Infinity War Part I, is in production at Pinewood in Atlanta. Renner had not started his part of shooting, and his injuries won’t impact any set schedule. The movie has a May 4 release date; Part II is set for May 3, 2019.

He also returns along with Tom Cruise and others for the next Mission: Impossible movie, which began production in April. That untitled pic has a July 27, 2018, release date.