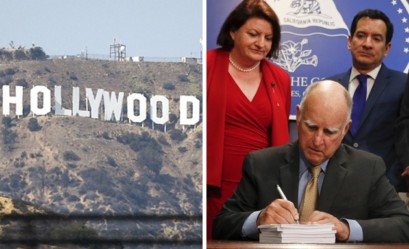 With less than six months before his successor is elected, California Gov. Jerry Brown today extended one last gift to Hollywood with the signing of his last state budget and legislation to continue the $330 million film and television tax credit program.

Inking the $201 billion budget Wednesday in Los Angeles, Brown didn’t make any specific comments about the extension of the program until 2025, but he was on a swan-song roll worthy of a Tinseltown tentpole. “When I took office back in 2011 with the state facing a $27 billion deficit, I pledged to work with the Legislature to fix California’s financial mess,” the governor declared as the budget and SB 871 on the credits were signed. “Today, the final budget I sign delivers on that pledge and prepares us for the future.

While never a proclaimed big priority for the Northern Cali-centric Brown, the growth of the 2009-originated $100 million-a-year, blockbuster-avoiding and lottery determined program has proven a winner. Since the new non-lottery and employment-emphasizing 2.0 version was made law by Brown at a Hollywood Blvd event in September 2014, the once set to expire in 2020 program has been steadily bringing production back to the home of Hollywood from other states and countries.

With new films and series and the much valued relocating series, the 2.0 program has seen 30,000 cast members hired and around 18,000 crew members, below and above the line, drawing paychecks since 2015. Besides the obvious tax revenue such employment raises, allocations from the surge of TV series and the increasing number of $75 million plus budgeted tentpole films that have now filmed in California has seen almost $6 billion in direct in-state spending since 2015.

As ambitious L.A. Mayor Eric Garcetti acknowledged today when he said, “by extending the film and television tax credit, this budget protects and an industry which is integral to L.A.’s economy, and to our identity as the creative capital of the world.”

The state organization that administers the tax incentives, which should be making a new TV allocation announcement soon, were in a good mood too.

“The new five-year extension signed into law today provides assurance that California will remain competitive, which means more employment for in-state crew members and production spending here at home where it belongs,” said Nancy Rae Stone, Tax Credit Program Director at the California Film Commission to Deadline after the budget signing. “The Film Commission is prepared to implement the new tax credit provisions and looks forward to managing Program 3.0 as part of California’s ongoing fight against runaway production.”

Having inched through the legislature in Sacramento over recent months, the expansion passed key committees crossed it near final hurdles late last month. It was uncertain if Gov. Brown, who has been showing up at Democratic fundraisers in town of late, would be signing the 3.0 legislation, which includes anti-sexual harassment policy requirements, closer to the end of September deadline for such bills or earlier.

Clearly today, Gov. Brown wanted to get his Hollywood close-up in sooner rather than later.