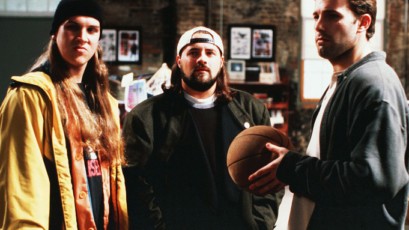 Kevin Smith long-awaited Jay and Silent Bob reboot has entered into the pre-production phase, according to Smith. The franchise helmer took to Twitter to announced that he, along with Jay Mewes and producer Jordan Monsanto, “Spent the first day of 2019 having a #JayAndSilentBobReboot pre-pre-production meeting at our holiday-roomy @WeWork office!”

Since first debuting in the 1994 comedy Clerks, Jay and Silent Bob have been seen in the majority Smith’s View Askewniverse projects with their most recent live-action appearance in the 2006 comedy Clerks II. They also starred in the 2013 animated film Jay & Silent Bob’s Super Groovy Cartoon Movie.

Smith, who suffered from a heart attack last year, is getting an early start on what could potentially be a busy 2019. Last year he teased an upcoming project, calling it the “most massive IP I’ve ever been allowed to play” and “the biggest budgeted anything I’ve ever done.”