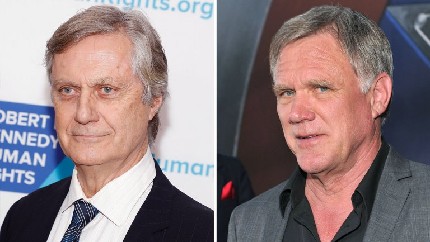 While the DGA usually allows only one director to be credited, except in the case of an established team, the two have decided to share the designation.

In a very rare development, two filmmakers are to share “directed by” credit on a major Hollywood movie.

Lasse Hallstrom and Joe Johnston will both receive the designation on Disney’s The Nutcracker and the Four Realms, the studio’s big-budget fantasy starring Keira Knightley and Mackenzie Foy that opens Nov. 2.

Hallstrom, known for dramas such as What’s Eating Gilbert Grape, Cider House Rules and A Dog’s Purpose, was the director originally hired to helm Nutcracker. In December 2017, THR revealed that Johnston, who has a strong visual effects background, was being brought on board for significant reshoots that were scheduled to take 32 days, with new material written by Tom McCarthy. At the time, sources said, Hallstrom was unavailable due to scheduling issues, but he would return for the postproduction process.

On the finished film, Hallstrom’s name will appear on the first line of the title card for the movie’s director, with Johnston’s name appearing on a second line, just below Hallstrom’s on the same card.

The DGA could not immediately point to a similar situation where two directors, who were not part of an established team, have voluntarily shared the credit.

“It was an absolute blessing to have Joe Johnston step in when it became clear that I wouldn’t be available for reshoots,” Hallstrom said in a statement to THR. “Joe is the ultimate expert in visual effects and I enjoyed collaborating with him on this film.”

According to the Directors Guild of America’s usual rule, only one filmmaker can be credited with directing a film. Typically, that rule is waived only for established directing teams that the guild recognizes as having either a history of working together or sharing a common vision. Such directing teams have included Ethan and Joel Cohen, Joe and Anthony Russo, and Phil Lord and Christopher Miller. (Animated movies often credit directors and co-directors, but they are not governed by the DGA rule.)

When a second director comes aboard for reshoots or significant “additional photography,” or when a one director is replaced by another in midshoot, the DGA steps in to decide which of the two deserves the sole directing credit if there is a dispute.

After Bryan Singer was fired from Bohemian Rhapsody, Eddie the Eagle director Dexter Fletcher came on to complete principal photography, but Singer has retained sole director credit. It was reported that Fletcher shot for about 16 days.

If the DGA becomes involved in determining who should receive a credit, one of the factors it uses is number of days each director worked, in pre- and postproduction as well as the actual shoot. But according to insiders, the DGA’s credits department had not become involved when Hallstrom offered to share the “directed by” credit with Johnston. The two then approached the studio who, as per norms, submitted the revised credits to the DGA for approval.

“I watched an early cut of The Nutcracker and the Four Realms, and I saw something unique and fresh,” said Johnston in a statement to THR. “When I was asked to direct the remaining elements, I saw an opportunity to complete Lasse’s wonderful and wildly inventive vision. I know we’ll both be proud of the end result.”