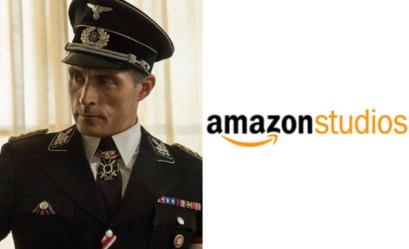 The era of The Man in the High Castle is coming to an end.

The upcoming coming fourth season of the acclaimed Amazon series based on Philip K. Dick’s 1962 novel will be its last, I’ve learned.

That fourth and final season is set to launch on the Jeff Bezos-founded streamer this fall.

MITHC meticulously and often chillingly depicts an alternative history where the harsh Nazis and Imperial Japan won World War II and carved up the globe, including the crown jewel of North America. Almost two decades into their rule a resistance has emerged fueled by mysterious films that show a reality much like our own.

Cast and crew on the Alexa Davalos and Rufus Sewell-led series from EP Isa Dick Hackett, showrunners Daniel Percival and David Scarpa and Scott Free Productions were notified of the cancelation over the past couple of days on set up in Vancouver and in their LA offices.

“It has been a great privilege to work alongside our extraordinary High Castle team, in partnership with David Zucker and Scott Free, to bring my father’s classic novel to life, particularly during this tumultuous period in our real world,” said Hackett Tuesday of the increasingly poignant MITHC. “I believe fans will be thrilled and satisfied by the epic conclusion we have in store for them.”

In that satisfaction vein, check out this teaser of Season 4 of MITHC:

“We are incredibly proud of all of the hard work from the massively talented executive producers, cast, crew, and everyone who has worked on The Man in the High Castle over the years,” Amazon Studios boss Jennifer Salke said today of the Emmy nominated series.

“With production ongoing on our fourth and final season, we can’t wait for fans to see how this final chapter in the story unfolds,” the exec added. “The Man in the High Castle helped define Amazon Prime Video in the genre space, and we are grateful and excited that we’ll continue to be in business with Isa and Electric Shepherd Productions for future Philip K. Dick adaptations.”

After MITHC and 2017’s Philip K. Dick’s Electric Dreams anthology, Hackett and her production shingle inked a wide-ranging first look deal with Amazon earlier this year. Electric Shepherd Productions is in charge of the stewardship and adaptation of the Philip K. Dick library, which Philip K. Dick Trust trustee Hackett jointly owns with her siblings.

I spoke with Hackett and fellow executive producer David Zucker about the end of MITHC and what we can expect for the final season. The two EPs also discussed the implications of making the series about fascist rule and the resistance in troubled political times in the real world, what Philip K Dick would have thought of our era and the series. The duo also hinted that there could be more of this saga, one way or another.

DEADLINE: With this being the end, what can we expect for Season 4 of High Castle? Do the Nazis get taken down?

HACKETT: Well, I don’t know how much we can tell you in the way of plotting and such, but I will say we appreciate being able to have an exciting and satisfying culmination to the show.

It’s a great opportunity to be able to sort of plot out the final season in the way that we have, with this extraordinary team. So, I do think that the fans will be thrilled and satisfied by it, but I can’t give away any specifics, unfortunately. David, do you want to take a stab at that?

ZUCKER: I think I’m under a similar restriction. I guess maybe the one thing, which you’d be better to speak to, is whether you feel it at least conceptually fulfills the sort of tenets of the novel, which you have mentioned your satisfaction with.

HACKETT: Yeah, that was a big part of the conversation that we had when we were talking about this culmination. And I do think that we end on something that would be very familiar and I think particularly satisfying for PKD fans, and I would imagine that he would appreciate it a great deal, my father, that is.

DEADLINE: In the time since High Castle’s debut in 2015, there has been a wide spread political shift in the West with the election of Donald Trump and right-wing populism parties rising up all over Europe. As the series now moves into its final season, I wanted to get a sense of, as much as you can, how you feel that the series has mirrored the time in which it has existed?

ZUCKER: I think it’s been obviously disturbing to varying degrees for everybody involved with the series that there is a more sort of literal experience that can be drawn from much of what exists in the stories that we told, that we’re telling in the world that, we’re looking at outside of our own window.

And it’s not just today.

One can look at A Night at the Garden, the Oscar nominated short documentary, where one can literally look at actual footage in 1939 of what transpired in this country. If certain things hadn’t taken the course that they did during that era in history, who knows how that organization may have prevailed in mid-century America, and to what degree, you know, is that sort of informing some of the debates that are transpiring today?

DEADLINE: How much does that inform the show, especially going into the final season?

ZUCKER: As inescapable as that question is for us, in some ways it isn’t the question that we have undertaken in terms of our sort of fictionalized world. But there’s no questioning the deep unease that I think we all feel in the fact that this show has become more fiction-less, if that’s not an awful expression to put forward.

HACKETT: I think of all times to be dramatizing this novel, there may have been no better than now, this anti-fascist tale, and so I think during this fraught time, I think that it has been not lost on anyone on this show that this is a particularly important time to be, you know, having this discourse about the dangers of fascism.

ZUCKER: Maybe expand on just that point is, especially in this climactic season where we really delve into the resistance in a way that we haven’t explored previously. This whole central question of free will, as Isa’s referenced of the central anti-fascist premise of the piece, and to what length one will battle to achieve it. What one surrenders by conceding to the larger forces around them. I mean these are the very struggles that we’re experiencing, and so, it is utterly fascinating to be able to explore that as particularly as we have.

DEADLINE: What would you say to fans of High Castle of this final season as they learn today that the show is ending?

HACKETT: (PAUSE) That’s a tough one. I think I would probably just say that, of course we’re sad that we’re coming to an end. At the same time, we appreciate this beautiful, extraordinary, talented team of family that we have who has produced this alongside us and that I think that the fans will be thrilled by the culmination. There’s a lot of thought put into this and love and care and hopefully, they will see that when they get to finally see this culmination.

ZUCKER: You know, I don’t think there is any more highly motivating aspect of producing this series than wanting to make our absolute best effort to realize what extraordinary potential this material has and hoping that, season-to-season, and hopefully in its climactic episodes, that we’ve come close to sort of touching the audience’s hopes and wants and expectations.

DEADLINE: Well, there is a lot of material in PKD’s novel, even though the show expanded that world. I recall at Comic-Con last year Isa said that elements of Season 4 would draw from High Castle PDK material …

ZUCKER: Yes, and I think that could satisfy us when all is said and done that people feel, touched, inspired, challenged by what they viewed. But, you know, addendum to that, I think Isa and I both feel that there is a lot more story to tell in this kind of world.

ZUCKER: While we’re bringing this chapter to a conclusion, if one thinks beyond the final frames of this series, it is very provocative to think about what stories may come thereafter. Whether or not we all get to tell them or they get told in another incarnation in film and television, that’s for us to all see. However, I don’t think you can look at this as an absolute culmination because of the nature of the stories that we’re telling with that.

DEADLINE: With that possible next move Isa and the end of High Castle itself proper, I know it’s a near impossible question, but what do you think your father would have thought of the series?

HACKETT: Well, I really prefer not to guess what he would have thought, but I can say I hope that he would be proud of it, and again, I think the timing is a bit uncanny. You know, I keep thinking, knowing him, what he would feel about what’s going on in our real world.

I also think it’s important, to what David just said, which is this notion of resistance and the ways in which individuals can resist in various ways. We definitely explore that even deeper this last season than we have in the past. It’s important to me to leave with more of a sense of hope and inspiration than maybe we even have in the past. I think in Season 4 that that is something that hopefully people respond really well to.