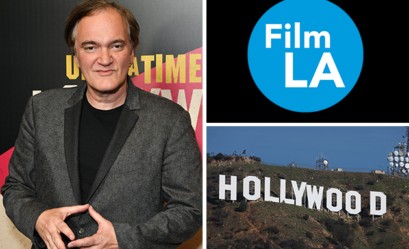 Quentin Tarantino’s Once Upon A Time In Hollywood doesn’t come out until July 26 but the flick is already a hit in Los Angeles.

Production of the Brad Pitt, Margot Robbie, Al Pacino and Leonardo DiCaprio starring Manson era movie in the City of Angels helped give on-location filming in Greater L.A. in 2018 a slight edge over the year before. With production on features up 15.5% in the fourth quarter of 2018 over Q4 2017 and rising overall 12.2% annually, total production is up 1.3% from 2017 and 5% from the end of last year, according to Film L.A.

The 38,795 shoot days clocked in last year are the second-best production results the non-profit permitting organization has tallied since former Gov. Jerry Brown signed an expansion of the Golden State’s film and TV tax credits program in the fall of 2014. Only the 39,627 shoot days that were racked up productionwise in 2016 topped last year. 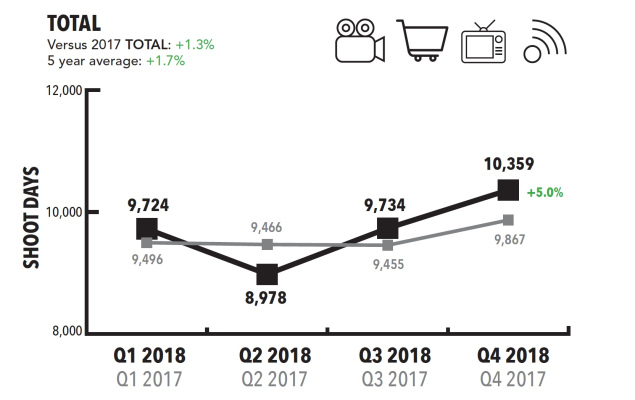 Having been awarded over $18 million in incentives in late 2017 through California’s $330 annual program, the period piece Once Upon a Time In Hollywood joined fellow tax credits recipients like Netflix’s successful Sandra Bullock starrer Birdbox and director McG’s Rim of the World effort to account for a not insignificant 11.4% of the feature shoot days last quarter. Now ceased filming, the big budget Tarantino helmed Hollywood had already provided a boost in Q3 of 2018 to local production.

On the flipside of sorts, the small screen took a slight slap of 4.9% in 2018 L.A. shoot days compared to the previous year. Fourth quarter 2018 to fourth quarter 2017, TV production was steady with a very slight 0.3 dip even though TV Dramas were up 9.0% in the same time period over last year’s comparable quarter. Reality TV, web-based TV and comedy were all down in 2018 by various measures but the always on-location heavy TV Pilots and TV Dramas rose 15.2% and 10.6% respectively over 2017.

Tax credit awardees like the final seasons of Crazy Ex-Girlfriend and VEEP made up nearly 29% of the production in the comedy category – a category that it has to be noted does not film on location anywhere nearly as much as Dramas or Commercials, which were up 8.7% over 2017 overall and 5.5% in Q4 2018.

If the recent past is any indication, the good times will keep going for a while for production in Tinseltown. Before leaving office this year, Jerry Brown inked an extension of the state’s big screen and small screen tax credits program last summer that will keep it going until 2025 at present levels – and that’s once upon a future for Hollywood.