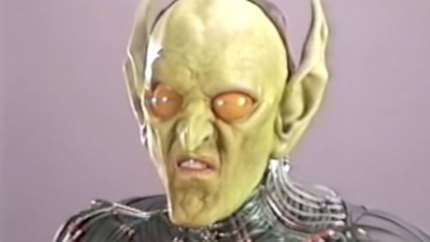 ‘Spider-Man’: Willem Dafoe’s original Green Goblin mask was amazing, The animatronics were so good, even the crew commented during one test on how creepy it was.

The original mask created for the Green Goblin in 2002’s Spider-Man was right out of the comic — and so well done, it creeped out the crew.

In a couple of behind-the-scenes videos that Heat Vision came across, it is clear the first swing at creating the classic villain was a home run. And with Spider-Man: Homecoming opening this weekend, it’s worth seeing what might have been.

The animatronic mask created by Amalgamated Dynamics would have completely covered Willem Dafoe’s face, looking more like skin; none of his features would have been seen.

The initial Goblin mask was stunning in that the range of emotion that could be shown on the face was outstanding. In fact, the animatronics were so good, even the crew commented during one test on how creepy it was. It appears the actor’s mouth would have been seamlessly worked into it.

Still, the one drawback to the mask having all those moving pieces is that it looks like the shoulder-mounted rig was extremely uncomfortable to wear and took some time to apply.

According to Amalgamated Dynamics, director Sam Raimi opted not to use the articulated mask before an actor was cast in the role, so the crew began working on the piece that would end up being used in the film.

“Because we did not know who would play the Goblin, James Kagel, Steve Koch and Greg Smith sculpted two sizes in hopes that one would fit whoever was cast. Luckily, not only did the smaller, sleeker version fit, but it resembled Willem Dafoe, who won the part,” according to Amalgamated Dynamics.

This footage, mixed with the unearthed Tobey Maguire screen test, shows that the first Spider-Man was likely going to be pretty dark, at least in the early going, which would make sense with Sam Raimi at the helm.

Check out the Goblin mask screen tests and the making of the final film version below.