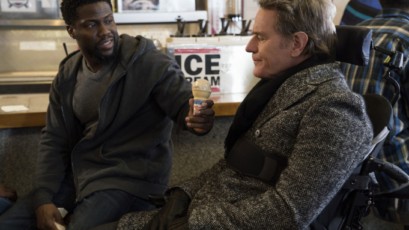 STXfilms’ release of Lantern Entertainment’s The Upside will cross the $100 million milestone Tuesday at the domestic box office, becoming the Burbank-based studio’s second release to do so in its nearly five years of operations. Bad Moms grossed $113.2M in 2016.

The Upside is Kevin Hart’s sixth starring feature to click past $100M and Bryan Cranston’s fifth. For director Neil Burger, it’s his second after Divergent. Among 2019 releases to date, The Upside is the second movie to surpass $100M after Universal/BVI/Blumhouse’s Glass.

We typically don’t write standalone pieces about movies passing the century mark in their seventh week of release, but this deserves some recognition: STX’s plan is to keep lower-to middle-budgeted fare alive theatrically, especially when streaming is encroaching on these types of movies that are aimed at specific adult demos. As Deadline reported exclusively back in August, STX partnered on global distribution rights with Lantern on The Upside after the latter took over the assets of the Weinstein Co.

Some of our sources have sniped that STX has no equity in The Upside given that it’s only a distribution deal for them. What needs to be understood is that STX’s corps, including marketing and distribution, got The Upside to where it is now at the box office, and that hard work and success cannot be denied. The Upside also has been a bright a spot for exhibition, putting food on their table in a winter season that’s the lowest in eight years.

The experience of working with STXfilms on the release of The Upside also led Hart to sign a two-picture development deal with the studio in January. While Lantern Entertainment will turn out well from owning Upside (analysts says around $50M including all markets before star participations), we hear that STX is poised to collect meaningful fees on the film (around $12M or 10% distribution fee).

The Neil Burger-directed feature made its world premiere at the 2017 Toronto Film Festival with then-producer/distributor Weinstein Co. There was great buzz about this remake of French megahit Intouchables out of the fest, but the movie sat for a year and half with a 55% Rotten Tomatoes score, thanks to the collapse of the Weinstein Co. following Harvey Weinstein’s sexual allegation scandal in October 2017. STX worked with Lantern and gave Upside the proper wide release it deserved, a fate that other TWC releases still can’t tout as they are mired in financial and legal entanglements.

STX worked with Burger and the pic’s stars to edit the film from an R rating to PG-13, in order to position it as a mass-appealing title. That worked, with The Upside earning a solid “A” CinemaScore and 4 1/2 stars on ComScore/Screen Engine’s PostTrak.

In the past, rival distributors sometimes would knock STX on its release dates, but in the case of The Upside, they can keep quiet. While Hart’s movies have had a traditional launchpad over MLK weekend, STX went a week early with Upside, avoiding Glass on the holiday frame. Upside was tracking for a $10M-$12M opening, and STX beat that with the pic delivering a great $20.3M start in the face of sour reviews (40% Rotten) and the controversy surrounding Hart’s Oscar hosting gig, about which the star continually had to field questions about on the talk show circuit for the film.

Strong word of mouth — a 70% definite recommend among women over 25, who repped close to half of Upside‘s opening weekend audience — made the pic the year’s sleeper hit, easing 20% in its second week of release, -30% in week 3, -25% in week 4 and only -15% this past weekend. To date the pic is enjoying a 5X domestic multiple, and it hung around in the top 10 last weekend at No. 9 with $3.1M as Glass dropped to No. 12 in its sixth weekend.

To help generate and build word of mouth, STX also screened the film extensively in the weeks prior to its release for a wide cross section of mom bloggers, military families, sports enthusiasts and teams and key media influencers. Among the teams shown the film in advance of release were the New York Knicks, Cleveland Browns, Philadelphia 76ers, Washington Wizards and others.

Speaking about the success of The Upside today, Adam Fogelson, Chairman of the STXfilms Motion Picture Group beamed: “This is an incredibly exciting result. We so appreciate that Neil, Escape Artists and Lantern worked with us to cut the film into its most satisfying and successful version. They are great partners and audiences truly love the movie. We’re thrilled for Kevin. This is one of the great acting and career success stories of recent times. We are grateful for Bryan and Nicole’s tremendous talent and support. And perhaps most gratifying of all for us is the fact that every one of the principles has thanked us and told us how grateful they are for what we did and the innovative way we did it, and are excited to dive into more projects with us going forward.”