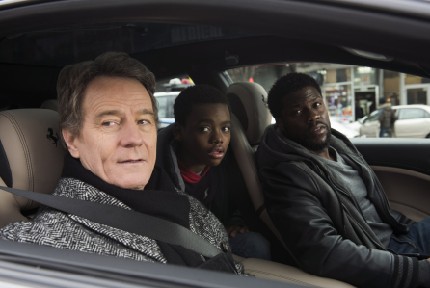 There seems to be no downside to Bryan Cranston and Kevin Hart’s comedy-drama “The Upside.”

The STX Films pic is on its way to becoming the entertainment company’s first No. 1 debut with an estimated $19.5 million from 3,080 North American sites, knocking Warner Bros.’ “Aquaman” into the second place slot. STX Films’ previous biggest debut was 2016’s “Bad Moms,” which landed $23.8 million for the No. 3 spot.

“The Upside” took in $6.95 million on Friday and is looking at a weekend estimate nearly double what the film had initially projected, which may be due to the film’s recutting in order to land a PG-13 rating as opposed to its original R. STX Films reached a distribution deal with Lantern Entertainment, which formed out of the Weinstein Company’s remaining assets, to handle the pic. It was originally intended to be released last year, but was postponed after the Weinstein scandal.

The film, which is a remake of the French hit “The Intouchables,” stars Cranston as a wealthy paraplegic with Hart as an unemployed man with a criminal record who’s hired to aid him. Nicole Kidman, Julianna Margulies, and Aja Naomi King also star, with Neil Burger directing. “The Upside” has a 39% rating on Rotten Tomatoes and A CinemaScore.

The latest DC adventure, “Aquaman,” should land in second place with about $15.4 million in its fourth frame. The weekend will mark “Aquaman’s” first without the box office crown since its debut. The Jason Momoa-starrer has so far pocketed an appreciable $275 million stateside and earned $5.7 million internationally on Friday for a running total of $713.4 million overseas.

Columbia Pictures’ “A Dog’s Way Home” is opening this weekend at No. 3 with an estimated $11 million from 3,090 domestic sites. Directed by Charles Martin Smith from a screenplay by W. Bruce Cameron and Cathryn Michon and based on Cameron’s 2017 book of the same name, the heartwarming family adventure film took in $3.3 million on Friday.

Meanwhile, Sony’s second top five pic of the weekend, “Escape Room,” is headed for an estimated $8.4 million in its second frame for an estimated tally of $31.93 million through Sunday. “Spider-Man: Into the Spider-Verse,” also from Sony, should generate another $7.4 million in its fifth frame, which would bring the domestic total to $146.175 million and land the pic the No. 5 slot.

Keanu Reeves’ latest, “Replicas,” also hit multiplexes this weekend and is estimated to bring in about $2.4 million from 2,329 sites. Directed by Jeffrey Nachmanoff from Chad St. John’s script, the sci-fi thriller follows Reeves’ neuroscientist, who brings his family back to life using science after they die in a car accident. It has a disappointing 13% rating on Rotten Tomatoes and C CinemaScore.

Ruth Bader Ginsberg biopic “On the Basis of Sex” is expanding this weekend to 1,923 nationwide locations and is heading for the No. 7 slot with about $6.5 million. Felicity Jones stars as the Supreme Court justice, with Armie Hammer as her husband, Martin.