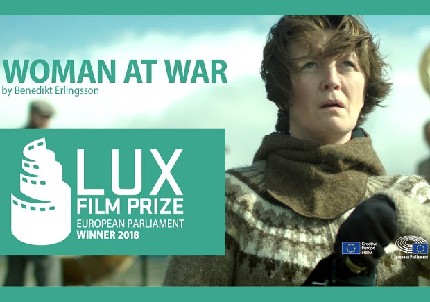 The LUX Prize goes to Woman at War

The European Parliament unveiled the winner of the 2018 LUX Prize at noon today in Strasbourg. Benedikt Erlingsson’s Woman at War, the energetic, environmental-themed and feminist comedy-drama about a woman who declares war on the local aluminium industry in the Highlands of Iceland has triumphed over its competitors, Styx by Wolfgang Fischer and The Other Side of Everything by Mila Turajlic. The Members of the European Parliament had the chance to vote for their favourite film from 15 October until yesterday, 13 November, in what turned out to be the tightest competition in the history of the LUX Prize.

EP president Antonio Tajani, who hosted the award ceremony, said, “The LUX Prize has this year offered us a competition that was indeed extraordinary in terms of originality and topicality. The finalist films are very diverse regarding their genres and topics, but they all have something in common: the lead characters are women who are resolute, determined, strong and, overall, in pole position when it comes to changing the order of things.” Tajani also addressed the importance of protecting the film industry in Europe and all the jobs it brings, and remembered the unfair situation of Ukrainian filmmaker Oleg Sentsov, imprisoned in Russia, and recipient of this year’s Sakharov Prize.

The award was collected by the film’s director, Reykjavik-born Benedikt Erlingsson, who stated, “I feel very honoured to be here in the temple of the power of the legislation. I feel like a politician, and I think politicians are also storytellers. In fact, you are also very brave, because you are taking on the real challenges of fighting against climate change. Climate change will be the focus of all politics in the future”.

The film, a true call for civil resistance to fight for and save nature from industrial greed and hegemony, is an Icelandic-French-Ukrainian production, staged by Slot Machine and Gulldrengurinn, in co-production with Solar Media Entertainment, Köggull SF and Vintage Picture. Already triumphant at several festivals and awards ceremonies (SACD Award in the Cannes Critics’ Week, Nordic Council Film Prize, among other accolades), Woman at War is now being released worldwide and is sold internationally by Beta Cinema.

Vice-President of the European Parliament Evelyne Gebhardt and Chair of the Committee on Culture and Education Petra Kammerevert have also presented recognitions to the runner-up films – Styx came in second, while The Other Side of Everything came in third. The ceremony was the highlight of the event organised by the LUX Prize in Strasbourg. Yesterday, a media round-table was held on the premises of the European Parliament, with the participation of the directors of the three finalist films, to focus on how cinema can raise awareness and prompt debates within civil society while also stimulating legislators to take action.

The three finalist films will keep travelling the continent through the LUX Film Days, screenings organised by the award in collaboration with several festivals and venues, the calendar for which can be accessed here.