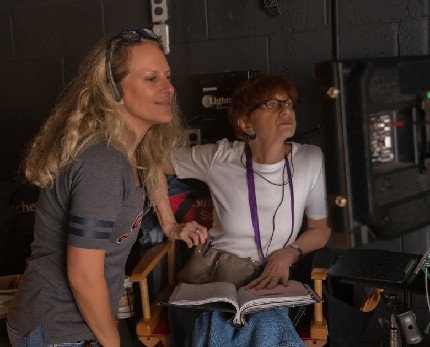 Anne Fletcher’s Hit Rom-Com ‘The Proposal’ Made $160 Million, Then the Genre Disappeared

After waiting for a rom-com renaissance that didn’t arrive, Fletcher evolved her career. Her next big step: making the sweet indie “Dumplin'” for streaming giant Netflix.

Nearly a decade after “The Proposal” made over $160M at the domestic box office — the Sandra Bullock- and Ryan Reynolds-starring charmer still ranks as the seventh highest-grossing rom-com of all-time — director Anne Fletcher is going the route of so many successful filmmakers before her: she’s stopped relying on studio gigs to carry her career. Between her new Netflix feature, “Dumplin’,” and a burgeoning television career, Fletcher has stayed nimble as ever, emblematic of an industry that so often forces its creators to evolve quickly.

After the monstrous success of “The Proposal,” the kind of box office juggernaut that made so many portend that the studio rom-com wasn’t dead after all, Fletcher helmed two more studio offerings (Paramount’s “The Guilt Trip” and Warner Bros.’ “Hot Pursuit”). Neither film enjoyed the success of their predecessor, and the same could be said of the rom-com, which did not at all enter into the studio-backed renaissance that was predicted. And yes, Fletcher noticed.

“We’re shifting gears tonally, humor-wise, all of that stuff,” she said in a recent interview with IndieWire. “And the good old-fashioned rom-com was starting, at that time, to get a little used up. … After ‘The Proposal,’ I was like, ‘Oh no, rom-coms are sort of disappearing.’ There’s a great audience for it, but I think because society had shifted, we’re just in different mind space now, that [audiences want] them to be grounded in reality. Sometimes the rom-com can feel a little syrupy. I think that just, as a society, we want more truth and we’re trying to find the truth. I personally think that that’s a very difficult thing to discover in the rom-com.”

Fletcher remains a rom-com devotee, and she’s hopeful that the genre will enjoy a studio resurgence. There’s already tremendous interest in a recent spate of Netflix-produced features, from “Set It Up” to “To All the Boys I’ve Loved Before,” and even “The Proposal” finally had its own numbers bested by this year’s hit “Crazy Rich Asians.” (Funnily enough, Jon M. Chu directed both “Crazy Rich Asians” and “Step Up 2: The Streets,” the followup to Fletcher’s own directorial debut, “Step Up.”)

“I’m a sucker for romantic comedy,” Fletcher said. “I think a lot of women just love love, and we want to be swept off of our feet. … But at the end of the day, the movies that I’ve done and the movies that I gravitate to, it’s like these women don’t need a man to complete them. It’s just a nice addition to their life and somebody who respects them and loves them for who they are and all their flaws. The man sees the woman for who she is and not what she’s portraying.”

That same message is readily apparent in Fletcher’s newest film: the Netflix feature “Dumplin’.” Based on Julie Murphy’s bestselling novel of the same name, the film tells the story of obsessive former beauty queen Rosie (Jennifer Aniston) and her rebellious teen daughter Willowdean (aka Dumplin,’ played by “Patti Cake$” breakout Danielle Macdonald). While Rosie’s days of winning pageants are long gone, her entire identity remains wrapped up in her glory years as a teen beauty queen, and that puts her at odds with Willowdean, who has never given much thought to the pageant scene.

Though most of the film is about Rosie and Willowdean’s relationship, there is of course space for a little romance, one steeped in self-acceptance. It’s classic Fletcher, just told in a new narrative.

While plenty of other filmmakers have recently turned to Netflix to offer them the kind of creative freedom the studio system isn’t always willing to offer, Fletcher entered the streaming fray from another angle: as a first-time indie filmmaker. “Originally, we made this movie independently, so we had nobody,” she said. “Then we, just like always, put it up in front of people, buyers, to see if they’re going to buy it. Netflix raised their hands. This is my first time doing this as an independent [filmmaker]. I didn’t know how it all happens, I learned as we went.”

The streaming platform ended up being the right place for the film, as Fletcher is eager for it to reach her target audience: teenage girls. “The main reason I did this movie, literally the number one reason is for girls,” she said. “The fact that we landed at Netflix was a godsend, … because I want as many girls to see this movie as humanly possible. My goal is to speak to anyone who feels like they’re on the outside and struggling with something, because we all have insecurities. And especially at that age we’re all just confused and insecure and trying to navigate through life. I just wanted as many eyeballs as humanly possible, because I didn’t have this kind of movie during my generation.”

That the film will instantly be available to millions of subscribers was appealing to Fletcher, who knows a thing or two about having a massive audience. The lessons of “Dumplin’” are a bit more personal than those in “The Proposal,” though, and the already-bubbly director becomes only more ebullient when talking about what the film means to her, and what she hopes it can mean to others.

“We’re so influenced as young girls riddled with insecurities, and I know boys have this as well, but girls, we take in what I call the lies from society,” she said. “Whether it’s parents, teachers, friends, film, television, magazines. Now kids have social media. And we take this information and put it in our being as our truth, and then we grow up and we’re struggling with, ‘How do I look?’ and ‘Am I skinny enough? Is my hair pretty enough?’ What a waste of time. What a waste of energy. You are perfect just the way you are period, end of story.”

A choreographer-turned-filmmaker, Fletcher made the jump to directing with the 2006 dance romance “Step Up,” which kickstarted both Channing Tatum’s career and a five-film franchise. She readily admits that she was offered the directing gig on the second “Step Up” film, but turned it down because she “didn’t want to get pigeonholed” as a choreographer who could only make dance films.

“I was like, ‘Shoot, I don’t want to get cast in a genre. I want to branch out. I want this to be a long lasting career, if possible,’” she said. “That’s just sort of how I thought at that time. … After the first one, when they offered the second one, I was like, ‘I don’t know how much more of a story I can tell based on what I’ve done in the first one, I don’t know where you go from there.’ … I wanted to make sure people knew I could do other things. And I sort of wanted to make sure that I could nail those. I wanted to do something completely different.”

It ended up being a rom-com, the Katherine Heigl-starring “27 Dresses.” That affection for the genre continues to motivate Fletcher. Maybe she’s still got a few more in her.

“I know that people are working really, really hard right now to bring it back, because there’s such an audience for it and we’re yearning for it. It’s an empty space to be filled,” she said. “I’ve had scripts and I’ve heard [from] studios, and producers, and writers. People are really trying to bring the genre back, which I cannot wait for, and I hope I can be a part of it, because I really love telling those movies. Don’t forget, everything is cyclical. It just is, so it’ll come back around. Everything always does.”

Netflix will release “Dumplin’” in select theaters and via its streaming platform on Friday, December 7.