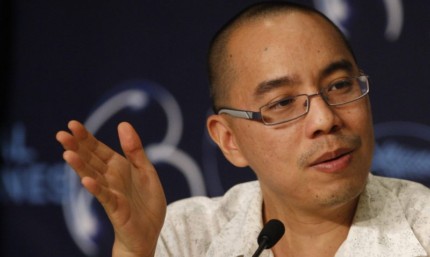 The Thai filmmaker receives the annual FIAF award November 19 and is busy with his next project, starring Tilda Swinton.

In the years since his 2015 feature “Cemetery of Splendour,” Thai filmmaker Apichatpong Weerasethakul has traveled a lot, presenting shorts and installation pieces around the world. These days, he’s plotting his first movie outside of Thailand, the Colombia-set “Memoria,” with Tilda Swinton and Jeanne Balibar attached to star. On November 19, he will receive the annual FIAF prize from the Federation of Film Archives. In the midst of all this activity, Weerasethakul was also invited to join the Academy of Motion Picture Arts and Sciences, in 2016 — but voting for the Oscars has little appeal to poetic auteur, who won the Palme d’Or for “Uncle Boomnee Who Can Recall His Past Lives” in 2010.

“They’ve been sending me these DVDs and movies. A lot of them,” Weerasethakul said in a Skype interview from a shorts festival in Europe. “I confess that I don’t watch many.” Last year, he tried voting using AMPAS’ online system, but missed the deadline by one minute. Now, he’s lost patience with the workload, and the fees.

“I’m totally going to quit it,” he said. “I am no longer interested in watching them. They charge you $350 or $400 for membership.” (Current AMPAS membership fees are $450 a year.) “To me, that’s really terrible, because as a foreign member, I don’t get any benefits besides these DVDs, which is a job,” Weerasethakul said.

AMPAS members in the United States have access to the Academy’s library and archives, in addition to screenings and other events. “If I lived in the States, I’d understand,” Weerasethakul said. “It’s stupid for me to pay. This amount is a lot to me with no benefit except to help the American film industry. They should waive this fee for foreign members. I was willing to vote and watch these movies, but I feel less and less motivated now.”

His relationship to America is an odd one. Weerasethakul didn’t have commercial ambitions, instead finding a kinship in the American avant-garde films of Bruce Baille, Maya Deren, Jonas Mekas, and Andy Warhol. His work explores Thai history and spirituality through a playful, meditative lens, but the arthouses experienced his work as boundary-pushing fairy tales. Though he was celebrated on the festival circuit beginning with his 2002 feature “Blissfully Yours,” his languid, dreamlike narratives found a much bigger audience after “Uncle Boonmee” scored the top prize at Cannes, where Tim Burton headed the jury. (For those in attendance, it was clear that Burton would be swayed by the first shot of red-eyed ghost monkeys.)

After the festival, studio offers drifted Weerasethakul’s way, but he shrugged them off. “People asked what genre I preferred, so I said horror,” he said, and laughed. “I knew that it wasn’t going to work out because I have to write my own scripts.” He expressed admiration for Burton, as well as some of the other major names he’s encountered in the festival circuit. In 2008, he served on a Cannes jury that featured Sean Penn and Natalie Portman, among others. “I feel that they don’t represent Hollywood either,” he said. “We’re the same, we love cinema, and have very broad interests.”

Balibar also served on the jury that year, forming the relationship with Weerasethakul that lead to his decision to cast the actress in “Memoria.” Swinton came to him as a fan of his work. The movie revolves around a character who suffers from “exploding head syndrome,” a real-life psychological condition in which a person experiences loud noises when falling asleep or waking up. Weerasethakul was already researching a story in Colombia when he experienced the syndrome for a brief period, and decided to write it into the script. Swinton’s character, a Scottish woman traveling Colombia, “experiences this symptom and tries to find the source of this sound,” Weerasethakul said. “With this symptom, she becomes an insomniac.”

The filmmaker spent three months traveling Colombia, passing through the cities of Medellin and Cali before settling on Bogota and Quindío region as the setting for his story. “I was first attracted by the Amazon jungle, but afterward, but I was more attracted to the city and the people’s memories,” he said. “This film is developed from the time that I spent there visiting certain towns. In the end, it became a very simple film.” He has been gathering stories from various locals and working them into the script, which is close to finished, and hopes to shoot in August 2019. “It’s about the issues of the memories of the people there in Colombia,” he said, “and also the landscape.”

Weerasethakul’s decision to shoot in Colombia is an outgrowth of the choice he made three years ago to stop directing feature-length projects in Thailand, having grown frustrated with the country’s censorship laws. He still plans to make documentaries there and work with his Kick the Machine collective in the area outside Chiang Mai, where he lives, but narratives are out of the question.

“For fiction features, it’s too complicated,” he said. “It’s too risky to talk in a very personal way with my name on the film. I really need to be able to talk about the military dictatorship, for example, and I can’t.” Nevertheless, he has benefited from associating with younger filmmakers and programmers in Thailand, who have inspired him to open his studio space for a screening series starting in December. When he receives the FIAF prize, the ceremony will take place at the Thai Film Archive, which continues to preserve his varied output.

“As I get older, I feel that I have to share more and learn more from younger people,” he said. “There is real optimism in the Thai film community, even though I’m not optimistic about it.”

In between features, art projects keep him busy. A traveling exhibition of his experimental video work entitled “The Serenity of Madness” began traveling the world this summer. For “Cemetery of Splendour,” he devised the interactive theatrical experience “Fever Room,” a multi-screen installation piece featuring characters from the movie. He hopes to craft something similar to complement “Memoria.” “I feel like it’s less layered with the feature because cinema has so many rules you have to follow,” he said. “You have to sit still in the dark. But visual art has fewer rules.”

When the offers for bigger projects subsided, Weerasethakul settled back into a routine of tackling his own projects. His latest short, “Blue,” was shot in his backyard. “I’ve been trying to find different ways of presenting different moving images,” he said. “It’s been slow. I don’t live in Bangkok, so I’m really far from the action. I’m more like a hermit in the mountains.”