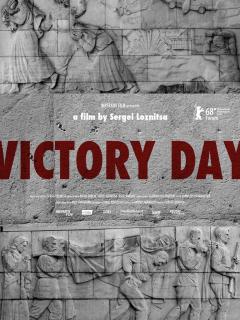 The setting for Sergei Loznitsa’s newest documentary, delivered with his trademark radical directness, is the Soviet War Memorial in the green lung that is Treptower Park in the southeast quadrant of Berlin. At one end towers the massive statue of a strapping Soviet soldier, sword in his hand, child nestled in the crook of his arm, standing atop a trampled, broken swastika. All the way at the other end, past the 16 decorative “sarcophagi” on which Joseph Stalin quotes are literally carved in stone, and through a raised portal of red marble emblazoned with hammers and sickles, a gently downward-sloping avenue, lined with hushed weeping willows, leads to a much smaller statue: a seated woman, bowing her head in grief. This is a fraught place on any day of the year. But each May 9, known throughout the former Soviet Union, as well as among the Russian-speaking residents of Berlin and beyond as “Victory Day,” its complicated, compromised relationship to the events it memorializes is spotlit when it becomes a site of pilgrimage, revelry, and rivalry for the Soviet diaspora.

Filmed on Victory Day in 2017, Loznitsa’s film is a perfect corollary to his last doc, “Austerlitz,” though in describing a historical commemoration less vividly mapped in the general imagination than that of the Holocaust, it may be of less obvious interest to a general viewer. Especially as, here, the proceedings that the sometimes wry, sometimes compassionate, but always detached camera observes are themselves so diverse in intention and import.

Teenagers practice wonky martial choreography in ill-fitting uniforms. Old women carry pictures of handsome soldiers framed in black ribbon. A burly man, perhaps one of the many bikers who have traveled here from abroad, wears a top bearing an heroic image of Vladimir Putin captioned “MR PRESIDENT.” Clusters of friends drink cheap vodka, play music and sing region-specific, traditional songs while a long line of supplicants queue on the statue’s steps to file solemnly through the chamber at its base and place flowers on a chin-high pile; outside, a woman remarks that the whole city has sold out of red carnations. And beneath it all, beneath the gleaming flagstones that line the central boulevard, is the final resting place of 5,000 of the men who died during the battle for Berlin. As well as everything else, this place is a cemetery.

“Victory Day” is a study in such contrasts, like the woman folk-dancing as onlookers clap, while nearby a bas-relief sculpture depicts strong-armed peasant women wielding machine guns in attitudes of defiance. But the greatest contrast is between the clamor and bustle of the day and the austerity of Loznitsa’s formal approach. As ever, he eschews voiceover, talking heads, scoring, and other such hand-holding techniques in favor of crisply defined yet impressionistic you-are-there immersion. What little editorializing there is happens in the edit. Occasionally a juxtaposition feels pointed. At other times, with an unobtrusive manipulation of the soundtrack, an overheard snatch of dialogue (“My God, who stuffed your dumb brain so full of…”) or a Soviet nostalgist pop song (“…Born I was in the Soviet Union, I was made in the USSR…”) changes the whole mood of a scene.

This is Loznitsa, with the gentlest of hands on your elbow, directing your attention one way or another, making subtle commentary not on what is being commemorated, but in how we commemorate, and why. No matter how noble our ostensible intentions in marking anniversaries, laying wreaths and participating in the various rituals of memory, the dead become part of the agenda of the living. “Victory Day” seems so simple, but it is properly complex: a conflicted memorial to a conflicted memorial.