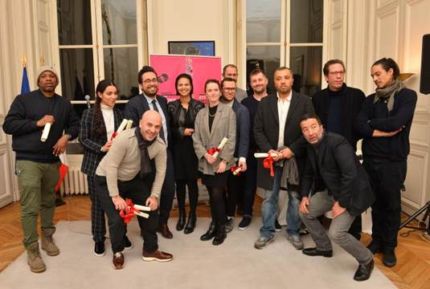 This year, MyFrenchFilmFestival once again achieved record results with over 10 million views worldwide for the films of the selection.

The following five countries registered the most views on the MyFrenchFilmFestival.com platform (in descending order): Mexico, Brazil, Argentina, Poland and Russia.

As a reminder, MyFrenchFilmFestival was also visible on over 50 partner platforms:

The winners were awarded on 19 February 2018 in Paris.

Isabelle Giordano (General Director of UniFrance) awarded the following prizes, in the presence of Mounir Mahjoubi, Secretary of State under the Prime Minister, in charge of Digital Affairs.

MyFrenchFilmFestival audiences turned out in droves to vote this year (with more than 50,000 votes!).

The winning films will be shown on board Air France flights for a period of six months.

Once again this year, unifying social events were organised around the world to unite Francophone and French film fans.

The festival gave spectators a new opportunity to meet in person and attend screenings to watch the best of new-generation French and francophone cinema!

Screenings of the short films from the selection were organized in Paris at the Atelier Renault on “the most beautiful avenue in the world”: the Champs-Élysées. This was a chance for French directors to make direct contact with their audience and share an enjoyable moment in this iconic Parisian spot. Amongst others, Morgane Polanski came to present a preview screening of her second short film La Caresse (“The Stroke”).

Thanks to a partnership established with the AEFE (the Agency for French Education Abroad), screenings were also set up in 20 or so schools around the world, including Tokyo, Los Angeles, Warsaw and Dubai. Furthermore, with support from the international Institut Français network, films from the selection were shown on the big screen in Russia, Colombia, Brazil, Egypt and Italy.

Several thousand people also participated in the MyFrenchFilmFestival facebook contest to win a trip for 2 to Paris and 5 nights at the Hôtel Scribe, made possible thanks to support from Air France and the Hôtel Scribe.

Other new features this year included the Festival playlist and the Jury’s playlist, put together in collaboration with the Bureau Export (French Music Export Office), which are still available on many broadcast channels.