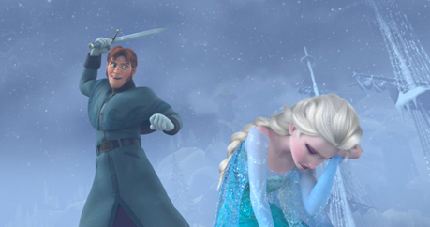 When Hans — the handsome prince from Disney’s 2013 blockbuster Frozen — turned out to be an evil psycho killer I’ll admit I was pretty shocked. In my defense, basically everyone else who saw the movie for the first time was pretty shocked too. Gina Dalfonzo, writing in The Atlantic, said Hans’ big reveal — that his whirlwind romance with Anna was a ruse to claim the throne of Arundel — felt “so abrupt that it seems more like a poor writing choice than like a clever concealment of the truth.” I agree it was abrupt. But it was more than just bad writing. It had been a long time coming.

Hans joined a long line of male villains in Disney princess films. In fact, with the exception of Tangled, every Disney princess film after Beauty and the Beast (which came out in 1991) had a male villain. But before that, they were all female. And there was a reason for that. The traditional fairytale princess narrative depicts a girl’s journey to womanhood via a conflict with some kind of jealous older woman — usually, but not always, a mother figure. It’s a conflict that arises because the older woman — who used to be beautiful and sexually desirable — is unwilling to be usurped by the innocent, unknowing girl who is just beginning to emerge into womanhood. (Snow White’s stepmother, the Evil Queen, is the most obvious example of this, staring into her mirror obsessed with who is the “fairest.”)

The princess’ journey, in this kind of story, is a personal and internal one. The princess isn’t fighting injustice or oppression, she’s fighting against the pull of childhood. Snow White, for example, must escape the Evil Queen’s plot to keep her a child forever in the “sleeping death.” Cinderella must get out from under the Wicked Stepmother’s thumb and assert her independence by going to the ball. The princess must break free of these jealous crones, and throw off the bonds of childhood, in order to emerge a full and independent woman.

The early Disney princess movies depicted exactly this. They told the story of a girl growing into her womanhood. They were female-driven narratives, (the princes were often almost extraneous) pitting woman against woman, in a fight for autonomy.

Disney princess villains switched from female to male at the exact moment that Disney filmmakers began talking overtly about feminism. “Belle is a feminist,” explained Beauty and the Beast screenwriter, Linda Woolverton. And Gaston — the first male villain in a Disney princess film — is pretty much “Mr. Toxic Masculinity.” Don’t get me wrong, I love Beauty and the Beast — the juxtaposition of the Beast and Gaston works within the context of the film — but the movie definitely marks the beginning of a shift that would continue to play out over the course of the next three decades.

Suddenly the princesses weren’t only trying to find their way out of childhood and into womanhood, they were also trying to escape a “toxic” male villain who either wanted to place her in some sort of terrible romantic situation, or sought to subjugate her in some other nefarious way. Jafar (from Aladdin), for example, wants to marry Jasmine in order to become Sultan (he even dresses her in red, chains her up, and implies that he will enjoy sleeping with her). Relatedly, almost every one of these movies, has the princess fighting against betrothal to a man she doesn’t want to marry — a circumstance that the princesses before this shift never had to face. (The only exception to all this is the 2010 film, Tangled, a surprising throwback to the original kind of princess narrative, with Mother Gothel playing the jealous mother figure to a T.)

Enter Hans. I said earlier that there wasn’t a shred of foreshadowing to let us know that this handsome prince was really a total nut job, but actually there was one thing: he seemed like a really great guy. By the time Frozen came out in 2013, the shift that began with Beauty and the Beast had taken the princess narrative about as far from its original iteration as it could possibly go. See, the villain in Frozen is the patriarchy. If a guy seems like your perfect match, the movie tells us, he isn’t — because men are evil and psychotic, that’s it, the end.

Modern Disney princesses are still trying to find their way from girl to woman. Each movie begins with a child asserting her desire for independence within a situation that is holding her back. But, without the crone to try to keep her from growing up, her journey towards becoming her own autonomous being relies not on her ability to leave behind the fetters of childhood, but on her willingness to cast off the company of men. What kind of womanhood will she find, though, without a partner to share it with? It’s a question Disney is trying to answer. If only they didn’t have to try.