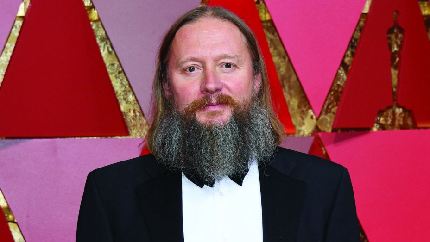 The director discusses why he hopes Netflix gives the film a theatrical release, and defends his choice to cast American actor Chris Pine to play a Scottish hero: “My glib line is, do you need to employ real-life astronauts to make a space film? And I’m not sure you do.”
Having seen his neo-Western crime-heist thriller Hell or High Water become one of the most critically acclaimed films of 2016, earning four Oscar nominations in the process, David Mackenzie returned to his native Scotland for his next feature, dragging High Water star Chris Pine along for the ride and swapping his cowboy hat for some chainmail armor. Telling the bloody story of Scottish hero Robert the Bruce, a one-percenter who waged a successful war of independence against the English in the 14th century, Outlaw King, the TIFF opener, gives Netflix its highest-profile slot at a major festival. Speaking ahead of the Sept. 6 world premiere, Mackenzie discussed why he’s avoiding Braveheart comparisons and talked about a low-profile indie project being produced by Barbara Broccoli that he’s now the bookies’ favorite to direct.

Were you surprised that Toronto chose to open with a Netflix title?

It’s a very, very cinematic movie, and that’s why we were super keen to get in on a big screen at a festival, even though it’s been a real rush to get it ready in time.

Does Netflix have plans to give it a theatrical release?

I’m certainly hoping so, and the words are in the right direction that they’re going to put it out there at the same time as it being available on the small screen.

And on more than just a couple of screens in L.A. and New York?

The unofficial words speaking to me seem to suggest it’s going to be more than that. Netflix is trying to work on a bigger scale with original movies. I think that will be the future — they’ll be trying to develop relationships with the theaters. That’s the plan; they’re working with some great, high-profile filmmakers, and I’m really hoping that’s the next deal. The question is, will Netflix become Disney faster than Disney becomes Netflix?

Were there a lot of potential projects circling after the success of Hell or High Water?

I actually got the financing for this shortly after the Oscars, where we were nominated. So there wasn’t a lot of time, and this had been a passion project for about seven years. We’d been looking for a home for this, and eventually we found it.

What was it about the story that made it such a passion project?

Robert the Bruce is, I guess, Scotland’s national hero. He was the guy who was successful in fighting the fight and re-establishing the independence of the country. So he’s quite an important character to try to make a film about. But he’s a complicated hero. He gets half of the way he wants to go by murdering someone in a church. He’s one of the one percent. He’s not an easy hero to go, “He’s our folk guy.”

Did Hell or High Water help get it off the ground?

There was definitely a sense of doors opening. And choosing to have Chris as my leading man was a very easy open door for me, which was great.

Robert the Bruce’s most famous big-screen outing, Braveheart, was accused of being historically inaccurate. Is Outlaw King an attempt to set the record straight?

That film was made 20 years ago and had a certain perspective, and if you look at it now, you might be quite worried by some of that blood and soil stuff in this day and age. It’s not something I’m desperately keen to even attempt to try to compare. The historical accuracy of what Robert was doing is something we’ve tried a lot to delve into in our film. Some things are conflated, but essentially these narrative beats are things that happened.

The trailer includes the line ‘based on the untold true story’. Was this not a sly dig at Braveheart?

Well, not directly from me, put it that way!

The film seems a lot more epic than your previous titles. Did it feel so, logistically?

The big thing about making a big medieval movie is horses. Almost every day we had 50 plus horses, and just the size of them and the logistics of getting them there and the team that supported them was huge. The presence of those things is quite incredible in the movie. There are several major battles that involve horses, and I think we’re going to have to put a thing at the end saying no animals were harmed because it’s very convincing that they were.

Were there plenty of fake horses?

Did you manage shoot in Scotland?

We shot entirely in Scotland, according to the borders of 1305. We shot in Berwick-upon-Tweed, which was Scottish at the time, and we shot a scene in there that involved a quarter of William Wallace’s body being hung up in the town square, which did actually happen for real. I think it’s certainly the biggest homegrown Scottish movie ever made. I want to put at the end of the film, as well as no animals being harmed, that it was filmed entirely in Scotland according to the borders of 1305.

Chris’ Scottish accent in the trailer seems to have gone down very well, which must be a relief…

Do you think there’ll be any dissenting voices from Scotland that you didn’t get a Scottish actor to play the national hero?

Almost inevitably. But there are no Scottish actors who can finance a movie of this scale, I’m sorry to say. I chose a movie star whom I’ve worked with before who I thought would carry the role, and that’s what I did. Is it a racist thing to ask? I wonder. Dissenting about whether you need to have some connection to Scotland, whatever that may mean, is that in its own way falling into the cultural wars that are going on? My glib line is, do you need to employ real-life astronauts to make a space film? And I’m not sure you do.

This time a year ago, you were among the favorites to be directing the next Bond movie. Have you had meetings to discuss this?

I met with Barbara [Broccoli] a couple of times. I really like Barbara, and I know [Bond writers] Neal Purvis and Rob Wade well. I’m from a military family. There are a various things that could have connected me to that thing, but then I got busy doing this and that’s the last I heard. I haven’t had any further engagement.

With Danny Boyle having left, you’re currently the bookies’ top favourite to direct it again. You haven’t been back in touch?

I’m currently busy employed and not thinking about anything to do with that at the moment.

Would you like to direct a Bond, when you did have time?

I really don’t know how to answer the question. I like Barbara and Neil and Rob and that’s all I can say really.

What do you have coming up after this?

I’m going to take a break if I can and reengage with my family, who haven’t seen much of me over the past year.