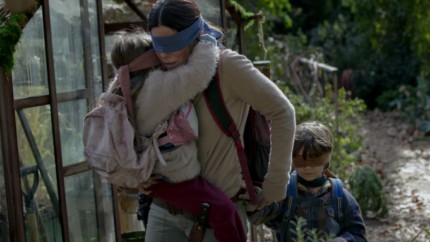 Netflix, which is notoriously strict in refusing to reveal data about its platform, lifted the veil on Sandra Bullock thriller Bird Box by revealing in a tweet that 45,037,125 accounts streamed the film during its first seven days.

That tally was the highest for any Netflix original film in its first week, according to the streaming giant, and shows the global reach of Netflix. Bird Box is among a batch of the company’s highest-wattage film efforts to date, coming on the heels of the Coen Bros.’ The Ballad of Buster Scruggs and Alfonso Cuaron’s Roma as a high-profile title with a theatrical release. As Deadline’s Anthony D’Alessandro first reported in October, Netflix agreed to the theatrical plans in an effort to boost the awards prospects of those films and to send a message to the talent community.

Bird Box, directed by Susanne Bier, stars Bullock as a mother navigating an apocalyptic landscape, trying to escape with her two children as an ominous presence drives much of the world to suicide. The screenplay is by Eric Heisserer, an Oscar nominee for Arrival.

It is difficult to translate viewing over the course of a week by 45 million streaming accounts into theatrical box office revenue — though that won’t stop everyone in Hollywood from trying. One key variable is how many people watched per account, and whether any of them watched the film again. Still, even a conservative analog suggests an equivalent to a theatrical opening of hundreds of millions of dollars, assuming everyone watching would otherwise have paid an average ticket price.

Nielsen has begun measuring Netflix film viewing, but only in the U.S. The 2017 Will Smith sci-fi title Bright, which has already yielded a sequel in development, was seen by an estimated 11 million viewers in its first three days on Netflix about one year ago, Nielsen estimated.

As major exhibition circuits continue to stonewall Netflix, the streaming company’s executives have encountered opposition from the organizers of the Cannes Film Festival, among others. (Venice, however, premiered no less than eight Netflix titles.)

The company has doubled down on its belief that its global model, not a traditional windows approach, best serves the average cinephile. At an investor conference earlier this month hosted by Wall Street firm UBS, Netflix content chief Ted Sarandos blamed exhibitors for “disconnecting” consumers from the film experience through their rigid adherence to windows. The same company that has championed Roma, shot in 65mm black and white, or the completion and restoration of Orson Welles’ The Other Side of the Wind is also about accessibility, he said.

“I don’t disagree that going to the theater to see a movie is a great experience,” Sarandos said. “I don’t think emotionally it’s a different experience than seeing a movie on Netflix.”