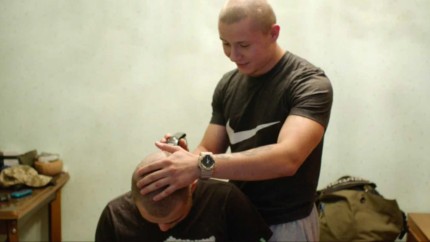 “War is a state of mind,” notes Cyprien Clément-Delmas, who, together with Igor Kosenko, directed “Boy of War,” the study of Artiom, a teenage Ukrainian whose dream is to become a soldier and fight for his homeland. Has Artiom really thought this idea through? This was the question on the duo’s minds as they began to follow Artiom for three years, until his 18th birthday, when he would legally be allowed to join the army – and what begins at first as an almost playful film about childhood aspirations suddenly takes on a much darker hue.

Making its world premiere in the Ji.hlava Intl. Documentary Film Festival’s First Lights section, “Boy of War” earned a Special Mention from the jury, who called it “a layered portrait of masculinity, skilfully constructed with humor and empathy, exploring the crossroads of youth and history, ideals and illusion.”

Moments after receiving the award, as well as the Student Jury Award, on behalf of Clément-Delmas and Kosenko, producer Fabien Driehorst sat down with Variety to discuss this passion project.

How did you find Artiom?

The directors, Cyprien and Igor, were shooting another documentary in Ukraine in 2013. There was this boy in camouflage gear following them in the woods. At one point they were scared – like, what is he doing? He was carrying a gun and hiding all the time. Then they confronted him – like, “What are you doing here? Why are you wearing this camouflage gear and carrying a gun?” He said, “I’m training.” He was 15 at that time. “Training for what?” “I want to become a soldier.” Then they found out step by step about his family situation and they got hooked. They didn’t know then if this would be a film, but it was definitely something strange.

How would you describe “Boy of War”?

It’s a coming-of-age story. We follow him from his 15th to his 18th birthday. We started shooting in 2013, before the revolution. Then we met him again after the revolution. He always was obsessed by guns, and we couldn’t understand what that was about. So the filmmakers were very curious to find out. First they found that his father was killed in war, and that his brother was working for the military in Russia. Then we realized that he is half-Ukrainian, half-Russian. He wanted to become a soldier, and when the war broke out he decided, “Yeah, I want to become one of these volunteer soldiers.” We found that so strange.

Because this obsession was just growing and growing, and theoretically – maybe not practically, but theoretically – he could have ended up fighting his own brother. In a way, because he didn’t had any family left, he wanted to prove himself in front of his friends, and there was a lot of competition going on [between them], like, who’s going to war, who’s not? I think that’s why he was kind of forced to [see it through]. We were following him through this struggle, leaving his friends behind, his girlfriend, everyone to fulfil this very naive dream.

How do you start a film like that if you don’t know necessarily know whether there will be a film at the end of it?

Cyprien and Igor were just, I think, kind of hooked, and then they shot a few scenes with him, just following him to his home. Then they left Ukraine and came back one year later, after the revolution, and wanted to see what he was doing next. So it was kind of very natural and easy in the beginning. Then, year after year, it became more and more serious. When he said on Skype that he was turning 18 years and that he wanted to go [and enlist], they thought, “OK, now we have to do something.” That was the point when the directors were asking me if I could come aboard and support them to help them to make it happen.

So what did they already have when you came on board?

They told me the story, they showed me the trailer and a little bit of the footage. I was just thinking, “I don’t know if that is a film, but if that kid is really going there, against all odds, this will definitely be something I’m very excited about.” So I said, “Yes, let’s try to get some support.” We got very little support, but it was enough to make it happen. It was really super low-budget, guerrilla style.

How long did it take in all?

I was not involved the whole time, but the whole project took five years from beginning to end, and for me it was almost three years. So it’s really a long time for such a small film, but we are super-happy that we made it. It’s the debut of the two directors, so everyone was really putting everything into it, in terms of time and energy. What made it complicated was that one of the directors is Ukrainian and one is French, I am German, the cinematographer was from Spain, and then the Ukrainian director moved to Los Angeles, so it became more and more complicated as we were trying to make things happen.

Did you have any problems with the boy’s family?

Well, the father was already gone, and the mother also left her son at one point, and went to live with her new husband in a different town, so he was kind of on his own. That was, for us, quite a challenge. Well, I mean, in the first place, it’s a challenge for him. His life is really tough.

How did you plan what the filmmakers would observe?

I think in the beginning they just wanted to follow him in his daily life, which is strange because he wasn’t really doing much. Playing war, and being addicted to everything related to that – people shooting guns on the internet, like in YouTube videos and that kind of thing. And then there was his girlfriend, and she really opened things up for us, because she was challenging him a lot. So we were starting to understand more and more about his personality, and then at one point the directors had an idea. They asked him if he might want to use a GoPro [camera], for a daily diary thing, and he agreed on that. Then we got the material and it was so much more personal than we were expecting – he was really opening himself more in front of the camera

Do you think it’s a universal story?

I think so, yeah. I think people from all over the world can relate to this boy in his naivety. Almost every boy, and I guess also some girls, have played war, in the forest or whatever. It’s exciting for many children, even if for adults it’s not so cool maybe, but I think that it’s something that many children all over the world have in common. Also, I don’t think you have to know much about Ukraine or the conflict with Russia. Of course, that’s the setting, but I think you can also watch this film in two or three years, and it won’t really have aged that much, because the themes and the issues, unfortunately, will still be the same.