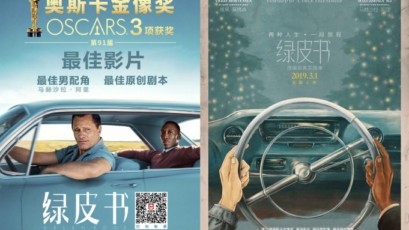 Chinese viewers tuned in to watch the Oscars live beginning at 7:30 AM Monday local time, following along as Green Book took Best Picture honors. The win has made national headlines in the Middle Kingdom and could have significant resonance in the country, where the film releases Friday and has the muscle of Alibaba Pictures behind it via its investment in Amblin Partners. While Alibaba has, understandably, touted the Oscar victories ahead of Friday — even getting e-commerce tycoon Jack Ma to turn up at a screening Monday night — state media is taking things a bit further.

A Xinhua commentary piece titled “Oscar Recognition Shows China’s Growing Presence in Global Entertainment Industry” has played up what it calls “a palpable undercurrent” to the Academy Awards, which “can be viewed as the starting point for a new period of growing influence for China in the international film industry.”

It’s not the sentiment of the Xinhua piece, and others that have come out in the past day, that’s a bit surprising — all countries pat themselves on the back when a homegrown film finds glory abroad — it’s the way the editorial connects the dots. The article focuses on the “mesmerizing and enriching” ways in which Oscar winners and nominees such as Green Book, Free Solo, Minding the Gap and Bao are “connected to China in its own way: either involving directors of Chinese origin or with Chinese fund support in production.” None of the movies mentioned originated in China. USC professor and China expert Stanely Rosen tells me the editorial is “an example of the Chinese government claiming credit for China for the success of creative individuals.”

The focus perhaps should be on partnerships between Hollywood and China, which have become more sober and effective than previous years. Certainly the strange bedfellows have been on a learning curve since the market opened significantly in 2012. There have been ebbs and flows, hubris-infused pronouncements and deals gone south, but internet giants including Alibaba, Tencent and iQiyi and games/movies company Perfect World Entertainment recently have made smart investments in firms and films. That includes the fruitful Alibaba/Amblin tie-up, which likely boosted last year’s Ready Player One, a smash with over $218M at the Middle Kingdom box office.

Regardless of the state’s claim to influence over the international industry, Green Book — which enters as a flat sale rather than a quota title — is expected to do well in China. It already has an 8.9 on reviews aggregator Douban and should see an Oscar halo effect that also boosted such recent movies as The Revenant, La La Land, Three Billboards Outside Ebbing, Missouri and last year’s Best Picture Oscar winner The Shape of Water. It should benefit from Alibaba’s tailored promotion.

Alibaba Pictures, whose shares rose on the Hong Kong exchange on Monday, called the three Oscars snagged by Green Book “a milestone” for the group and noted it also had involvement in nominees Capernaum and On the Basis of Sex. Ma further told local press that he had seen Green Book three times “and may watch it a few more times.” He added: “Alibaba Pictures will introduce more movies like this into China. And we will learn from them and gradually produce movies like this.”

Alibaba Pictures President Wei Zhang said: “Even though Alibaba Pictures is a relatively new entrant into Hollywood, we have a track record of choosing quality projects that not only have high entertainment value, but also have positive messages we believe in. We are honored to co-finance this Oscar-winning film and introduce it to Chinese audiences.”

The company last summer provided marketing and financial backing for hit Mission: Impossible – Fallout after making its initial investment in a global title with the previous M:I movie, Rogue Nation. Its Tao Piao Piao platform has a 30% share of the Middle Kingdom’s online ticketing business, which helps leverage titles locally. In a misstep, it invested in last year’s flop Asura, a pricey fantasy epic that was swiftly pulled from multiplexes.