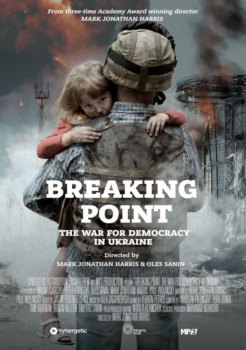 The Breaking Point: Documentary as Thriller

With The Breaking Point, three-time U.S. academy award-winning documentary director Mark Jonathan Harris teams with Ukrainian director Oles Sanin for this American-Ukrainian production, a thoroughly compelling thriller of a documentary about the War for Democracy in the Ukraine. Sanin directed the Ukraine’s official entry for the 2014 Academy Awards for Best Foreign Language Film.

Together, the directors have created powerful tension which builds exponentially throughout the film,  as they examine a country transformed by a democratic revolution. The multiple protagonists, who have given up their lives to fight a Russian invasion, are each provocative storytellers, bringing their personal experiences to the insightful analysis of a war that has killed over 10,000 people and displaced 1.9 million Ukrainians.

It’s a harrowing story, and Harris, known for carefully culling those he casts, has shaped a taut tale.

Essentially, Breaking Point examines revolution and war on an intimate, personal level. And, it offers a potent warning against allowing foreign powers into the election process and the press — a warning that should resonate strongly with viewers in the U.S. as Russian interference into our own election continues to be investigated.

Breaking Point begins with a poetic voice-over on a foggy road, as one of the film’s subjects, discusses his belief that “beauty, art, and love” will save the world. But these beliefs have been put the ultimate test. He notes that when “they started killing people – it was the breaking point, when people realized helping from a distance was not enough anymore.” From a look at a bleak and bombed out airport still under attack, the film neatly sequees back to 2013, when a social media post drew huge crowds to Maiden Square in the nation’s capital, Kiev, to protest the Ukrainian president’s refusal to allow the country to join the EU.

With tense and compelling editing and the juxtaposition of a variety of stories, the film describes how the protestors “lost the fear of death,” and takes a long hard look at the “most blatant land grab” for the Ukraine’s territory by Russia’s Vladimir Putin, and how the revolution against Russia’s interference led to the formation of a people’s army.

Harris and Sanin expertly weave stories such as that of an investigative reporter run off the road and beaten by thugs affiliated with the Ukrainian government, with that of resistance leaders, and political scholars.

The shocking recognition of Russian influence in the media, as well as the government itself, should strike a familiar chord for viewers – the phrase “fake news”  is all too real in the Ukraine. From photoshopped images spreading lies about protesters to paid actors portraying pro-Russian Ukrainian citizens, the manipulation is chilling and well-orchestrated. In describing the Russian propaganda machine, the point is made that “Russians understand western media better than western media does. They understand the short attention span… the flood of events.”

In short, Breaking Point offers an entirely relatable story, a tribute to the spirit of the Ukrainian people and their belief that they could win their fight and recover.

With subjects narrating their stories in an interwoven quilt of first-person events, this harrowing look at the Ukraine is both raw and real.  Viewers will find themselves on the edge of their seats, as the events that began with a protest on The Maiden unfold.

The underlying message of the film could not be more timely, that the future of European democracy, and perhaps of democracy itself demands that Russia stop undermining the west. In the Ukraine, ordinary citizens took on those demands; in today’s U.S. political climate, the film is a must-see.