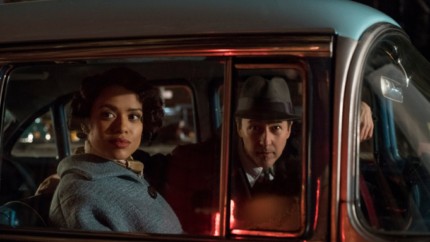 Julie Huntsinger, who is co-director of the Telluride Film Festival , opened Friday night’s World Premiere screening of Edward Norton’s Motherless Brooklyn by saying that she and her co-director Tom Luddy thought it was like something they hadn’t seen in a long while and labeled it flatly a “masterpiece”. That’s a lot to live up to , but Norton’s movie is indeed an extremely impressive one , particularly since he pulled an Orson Welles and stars, directs, writes, and produces it.

This is only his second time behind the camera and it has somehow taken 19 years for the urge to kick in again . In 2000 he directed a film I loved and thought was way underrated, Keeping The Faith. What got him to commit for his sophmore effort was Jonathan Lethem’s 1999 novel of the same name, if not the same era. He read it 20 years ago and obviously couldn’t shake the idea of turning it into a film, even though Lethem’s book was set in contemporary times and Norton believed the gumshoe-style detective dialogue would be better suited to the NYC of the 1950’s. The author didn’t object and Norton set about making his noir his way while staying true to the main character of a private eye named Lionel out to solve the complex web of events behind the murder of his mentor, played by Bruce Willis. Lionel is a unique character in many ways, namely afflicted with Tourette’s Syndrome that leads to awkward encounters with people and over which he keeps apologizing for not having control. His quest takes him from Harlem to Brooklyn to the city’s power centers as he tries to get to the bottom of a mystery even Sam Spade would have trouble with. Beneath the veneer of a Bogart-style detective flick, Norton has also found much food for thought, a movie set in 1957 but sadly still relevant to the America of today in some ways.

He has made almost a jazz riff or tone poem with rhythmic conversations set in the city, backed by a stunning musical score from Daniel Pemberton, best I have heard all year, with lead horn played by Wynton Marsalis. The music is almost a character unto itself in the film which also benefits from gorgeous cinematography from Dick Pope and superb production design.

It is not surprising that Norton would want to play Lionel. It’s an irresistible role and he sneaks up on you in memorable ways. It’s also no surprise he was able to attract a top drawer cast and get perfectly nuanced performances from them including Willis , Willem Dafoe, Gugu Mbatha-Raw, Cherry Jones, Leslie Mann, Bobby Cannavale, Michael K. Williams, and in his best screen work in years Alec Baldwin as Moses Randolph, the real estate kingpin to whom all roads seem to lead. It is ironic that the ruthless character Baldwin brilliantly plays in some ways reminded me of Donald Trump, certainly in his reckless attitudes toward dealing with power. Norton’s script is full of great scenes and crackling dialogue that just pop off the screen, and all these actors seem to be reveling in it.

He introduced the film , along with his other producers and cast members Dafoe and Mbatha-Raw. “I want to thank Warner Bros . We made this film independently and Warners took an enormous leap with us and have been just stupendous in supporting us , getting into festivals and getting it out. In particular my friend Toby Emmerich who has patiently waited for this film for 20 years,” he said noting he had done his Oscar nominated turn in American History X at New Line in 1999 and that is when they started talking about making this book. Finally Warners will open it on November 1. Hopefully they will handle with care.

“When a person directs a film , what they really do is they envision something that is total madness to actually try to make, like we are going to make a film about the 50’s in New York on a big scale , and we are going to film it in modern New York. We’re going to do it for what a third of what a studio budget would be and one tenth of what a Netflix budget would be. And we’re going to have the best cast in the world, and it is going to look great. That person should be locked away, ” he laughed recalling the audacity of his ambitions in making this film.

Damn if he didn’t pull it off.