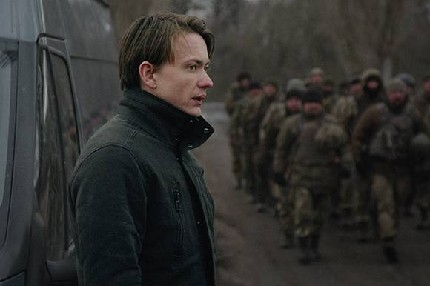 The decision was taken by the Lithuanian committee of the American Academy of Motion Picture Arts and Sciences. Frost, which is the latest work of the filmmaker Šarūnas Bartas, competed for the right to run for the prestigious award in the category of the best foreign language film with the other two candidates – The Saint directed by Andrius Blaževičius (2016) and Together For Ever by Lina Lužytė (2016).

“It is important for me, because it’s more than just my movie,” says Bartas, who feels honoured by the decision of the Lithuanian committee to choose Frost as the country’s candidate for the next Academy Award in the category of the best foreign language film. “I believe that this film is also much more than just Lithuanian. Sometimes fiction and reality are too close to each other and often the reality is worse than fiction, but always worth it.”

Filmed during a complicated expedition to the front lines of Ukraine, Frost tells a story of Inga and Rokas carrying aid from Vilnius to Ukraine. At the line of engagement in Donetsk, the young couple raised in the independent Lithuania without the experience of war quickly realise the feelings of people in the face of hatred, aggression, violence and ruin.