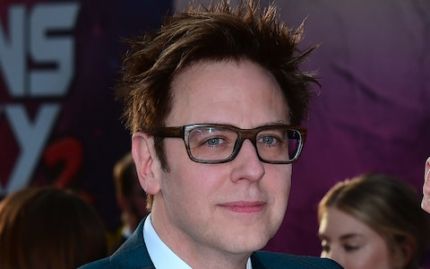 The cast of “Guardians of the Galaxy” issued a statement of support for director James Gunn a little more than a week after Disney fired him from the upcoming third installment of the series, asking that the studio rehire Gunn. 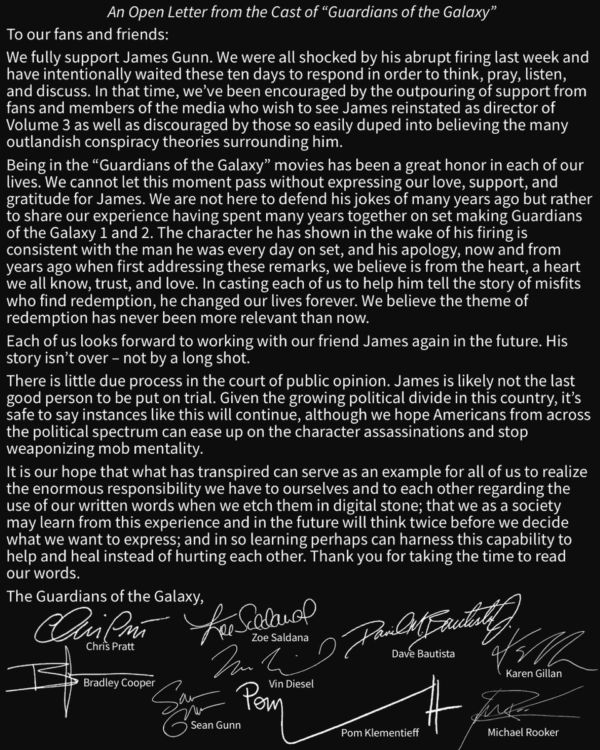 “We fully support James Gunn,” the cast says in a statement posted to Chris Pratt, Zoe Saldana, Dave Bautista, and other cast members’ social media accounts. “We were all shocked by his abrupt firing last week and have intentionally waited these ten days to respond in order to think, pray, listen, and discuss. In that time, we’ve been encouraged by the outpouring of support from fans and members of the media who wish to see James reinstated as director of Volume 3 as well as discouraged by those so easily duped into believing the many outlandish conspiracy theories surrounding him.”

“His story isn’t over — not by a long shot,” the statement adds. “There is little due process in the court of public opinion. James is likely not the last good person to be put on trial. Given the growing political divide in this country, it’s safe to say instances like this will continue, although we hope Americans from across the political spectrum can ease up on the character assassinations and stop weaponizing mob mentality.”

Disney fired Gunn after a series of offensive tweets were unearthed from years ago, where the writer and director appeared to make light of subjects such as pedophelia and rape.

In the wake of Gunn’s firing, a number of celebrities and other Hollywood figures have come out in support of the director. Selma Blair was the first and has deleted her Twitter account in solidarity. A petition has already garnered more than 300,000 signatures toward a goal of 500,000. Others are putting pressure on Disney, including comedian Bobcat Goldthwait, who has asked Disney remove his affiliation with its theme park rides.

Gunn’s firing over social-media posts has had a ripple effect in Hollywood, particularly since the tweets were surfaced by a right-wing, conspiracy theorist Mike Cernovich. “Star Wars: The Last Jedi” director Rian Johnson also deleted 20,000 of his tweets, saying on the platform that he was preemptively destroying any possible ammunition that “right-wing trolls” could use against him, he said.

Gunn has apologized for the tweets, saying that his “words of nearly a decade ago were, at the time, totally failed and unfortunate efforts to be provocative.”

Sources say there has been a growing feeling that Gunn could be reinstated, especially because Marvel and Disney have been unusually radio-silent on who could replace him since the firing. Production is slated to start at the top of 2019, and following Gunn’s removal from the film, it was thought that Marvel and Disney would need to move quickly to replace him, since the replacement would likely have to do some work on the script.

With Walt Disney chairman Bob Iger out on vacation currently, insiders believed a decision would not be made until he returned to work. Variety has reached out to Disney for comment on the cast’s statement.