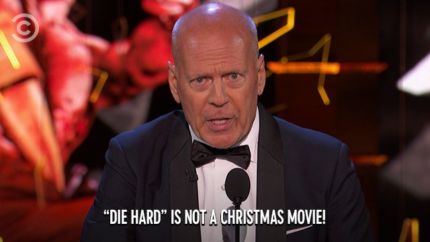 Some of the night’s more cringe-worthy moments were thankfully excised.

The real heroes of Comedy Central’s celebrity roasts are the editors. Sunday night’s “Roast of Bruce Willis” was taped on July 14, which means there was plenty of time to cut, tweak and massage the program. But that also means viewers got to see a Dennis Rodman who sort of made sense, a Lil Rel Howery who didn’t completely bomb, and a Dom Irrera who didn’t use the “n” word.

Viewers also missed out on some jokes cut for time — and perhaps for content. Nikki Glaser’s crack that she hoped the Roast was on Netflix so that people would see it was also on the cutting room floor.

Kevin Pollack, who also participated in the roast, told IndieWire he was “incredibly relieved it went as well as it did. Because it’s not particularly my cup of tea, what those things are. I loved them in the old days, the Dean Martin version. So when they morphed into a panel mostly made of people who don’t know the person being roasted, they’re just funny comedians, and their objective was clearly to be as disgusting as possible. It sort of lost all of the wonderful charm of seeing Don Rickles rip into Sinatra.”

Pollack said he didn’t want to be disgusting for the sake of being disgusting, so he had the show’s writers pass along their risque jokes — “and then I rewrote 80 percent of it, keeping several of the premises that were really pretty great, which I would have never thought of. And tweaking things to make them a little more of mine.”

The roasters who followed their scripts did the best, including Edward Norton, Martha Stewart, and surprise guest Demi Moore. Willis’ “Moonlighting” co-star, Cybill Shepherd, didn’t seem to get some of the jokes on stage, but then acquitted herself fine when it was her turn. More unfortunate was Lil Rel, who went on stage without a teleprompter — but with a crumpled sheet of paper — and probably quickly regretted the decision, not seeming to ever get past the fact that he didn’t know why he was there.

Irrera, on the other hand, started out decently by roasting the other attendees on stage, but then fell apart as he started to ad lib — shocking some in the room with the unfortunate use of the “n” word.

And then there was Rodman, whom veteran roaster Jeff Ross called “Kim Jong Unintelligible.” Rodman spent a chunk of his set struggling with his microphone and going off on incoherent tangents. Part of the crowd reportedly booed the former NBA star (and now North Korean bestie) when he rambled.

“I think someone in casting or producing said, won’t this be fodder for everyone, and it was, and then when he was up, it was instantly sad,” Pollack said. “He couldn’t figure out the microphone, which was the first problem, and then he was so out of his element, in terms of ‘why am I here?’” Much of that, however, didn’t make the final cut.

Even if things got awkward at times, Willis appeared to have enjoyed the whole event. “I sat next to him and had to give him my pocket handkerchief halfway through it because he was genuinely crying from laughter,” Pollack said. “They’re always concerned about how the roastee is going to react — I think more so ever since Chevy Chase decided it would be funny to frown at everyone. And Bruce was dying. And his three daughters were in the front laughing their heads off, and his mom. And I think that he actually had the time of his life.”