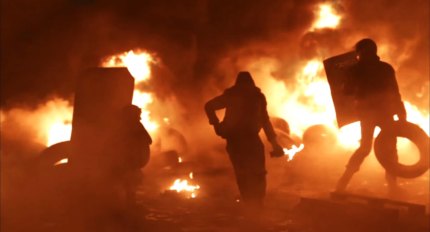 ‘Breaking Point: The War for Democracy in Ukraine’: Film Review

Mark Jonathan Harris and Oles Sanin’s documentrary chronicles the years-long struggle of Ukraine to maintain its independence.
This is certainly a futile suggestion, but President Donald Trump should really watch Mark Jonathan Harris and Oles Sanin’s documentary about the recent strife in Ukraine. Breaking Point: The War for Democracy in Ukraine powerfully chronicles the efforts of many of its citizens to battle the corruption and venality of their government and the incessant Russian aggression of both the military and propaganda variety. The film delivers a cautionary tale about Russian leader Vladimir Putin that Trump would be well advised to absorb. But it also has subtitles, so never mind.

The three-time Academy Award-winning Harris (The Long Way Home, Into the Arms of Strangers: Stories of the Kindertransport) and his Ukrainian co-director Sanin (The Guide) revolve their doc around ordinary but valiant Ukrainians who found themselves caught up in the struggle for their country’s independence. They include a children’s theater director who volunteered to help defend an airport from Russian invaders, a female journalist who suffered a brutal beating at the hands of government forces and went on to become a member of parliament and a former rabbi who served in the volunteer army.

Breaking Point begins by providing historical context, detailing how throughout the years Ukraine has been invaded from countries on all sides. It then covers the major flash points, such as the 2004 fraud-stained election of Viktor Yanukovych as president that resulted in the “Orange Revolution”; his eventual return to power as a puppet of Putin; the violent protests that later erupted as a result of such pro-Russia policies as refusing to sign an EU trade agreement; and the Russian annexation of Crimea in 2014.

While viewers who’ve seen the 2015 Oscar-nominated documentary Winter on Fire: Ukraine’s Fight for Freedom may find some of the material familiar (even the titles are similar), Breaking Point benefits greatly from its harrowing footage taken from both news and private sources. Besides the local figures prominently featured, several international experts are on hand to provide important context, including author Anne Applebaum (Red Famine: Stalin’s War on Ukraine), Canadian Foreign Affairs Minister Chrystia Freeland and Sergei Loiko, a foreign correspondent for the Los Angeles Times.

The film devastatingly makes clear the extent of Russia’s propaganda meddling, which has particular resonance in light of its recent attempts to also interfere with elections and public perceptions in America and Europe. The methods are often not terribly sophisticated, as evidenced by their use of a single actress to portray three different pro-Russia protestors featured in news stories (actors often play multiple roles, but this is ridiculous). But, as we’ve seen both here and abroad, the crude techniques are nonetheless often highly effective.

Ultimately, Breaking Point provides reason to hope, if only because it showcases the indomitable courage and spirit of the Ukrainian people. After all, when a rabbi and a children’s theater director can take up arms, it signals that while the war for freedom may be long, there will be no shortage of people brave enough to fight it.