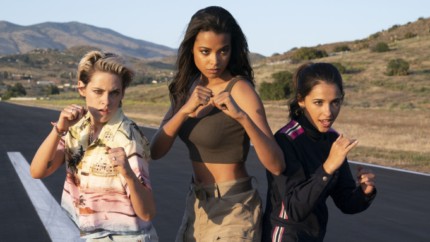 In the wake of Terminator: Dark Fate’s failure at the B.O., and Paramount’s recent decision to make Beverly Cops 4 for Netflix, we have the further breakdown of cinema IP in Sony’s Charlie’s Angels reboot, which is tanking with a God-awful $8.6M domestic opening, $27.9M worldwide (from 26 markets), 3 Stars on Screen Engine-Comscore’s PostTrak, and a B+ Cinemascore.

The Elizabeth Banks-directed-written and produced pic is also opening in 27 offshore markets, China being one where it’s also bombing, with a $7.8M 3-day take in third place behind No. 1 local title Somewhere Winter ($13.1M). All of this is primed to further spur a WTF reaction and anxiety among film development executives in town in regards to what the hell exactly works in this have-and-have-not era of the theatrical marketplace. Many will make the hasty generalization that old, dusty IP doesn’t work, or is now deemed too risky when it’s not a superhero project. However, moviemaking is an art, not a science, and annoying as it might sound, good movies float to the top, and this Charlie’s Angels reboot didn’t have the goods going back to its script.

We’re going to break down for you what went wrong in another graph, but we don’t want to bury the success of Disney’s release of Fox’s James Mangold-directed Ford v Ferrari, which looks to be coming in at $31.5M, well ahead of the $20M+ many were seeing, with an awesome A+ CinemaScore and 4 1/2 stars and a 68% definite recommend on Screen Engine/Comscore’s PostTrak. After a franchise-laden summer which buried originals, now an original pic is sticking it to the IP.

When it comes to the bombing of Charlie’s Angels, the takeaway is this is what happens when you have IP, but there’s no reason for telling the story. In the walk-up to developing Jumanji: Welcome to the Jungle, and in the wake of its near $1 billion success, a fever broke out at the Culver City lot in the post-Amy Pascal era to reboot former Sony franchises or extend them, i.e. Zombieland: Double Tap (well over $103M at the global B.O. now), the upcoming Bad Boys 3, and, of course, Spider-Man, the latter electrified by Disney’s Marvel. Development studio executives define their being by getting films greenlit, and whenever that happens, it’s 90% of the job. And the pressure is on to fill a 10-12 picture annual slate in a world where Disney vacuums up all the best IP. A third Charlie’s Angels with McG directing and Drew Barrymore, Cameron Diaz and Lucy Liu starring, wasn’t made immediately after the second chapter, 2003’s Full Throttle, as the sequel turned out to be 29% more expensive than the 2000 original at $120M, and also made less worldwide, $259.1M to $264.1M. With Elizabeth Banks coming off her hot feature directorial debut with Universal’s Pitch Perfect 2 (which over-indexed in its stateside opening at the B.O., going from $50M projections to $69.2M, and finaled global at $287.1M); after she expressed interest in September 2015 in taking on a Charlie’s Angels reboot with a modern feminist spin, there was no question in Sony’s mind that the project should move forward.

However, there were script problems, I hear, that could never be resolved. A few months after Banks boarded, Evan Spiliotopoulos came on to write. By the time cast was assembled in July 2018, Banks had penned the latest draft off a script by Jay Basu (The Girl in the Spider’s Web), and earlier drafts by Craig Mazin and Semi Chellas. Andrea Giannetti oversaw the project on the lot. However, I hear that the script for Charlie’s Angels didn’t really attract top talent, i.e. Jennifer Lawrence, Emma Stone and Margot Robbie (a trio that would have potentially jazzed up business). Hence, why the production opted to go with largely a fresh face cast outside of Kristen Stewart. While we overwrite that stars mean nothing at the box office, they do, sometimes, when it comes to propping IP, and unfortunately and arguably, no one in Middle America knows who British actress Ella Balinska is, and they’ve only became recently acquainted with Naomi Scott from Disney’s Aladdin and Lionsgate’s Power Rangers. Stewart, who is hysterical in the movie and even needed more funny bits, is in a different place in her career professionally, publicly, and privately. It’s unfair to think that she could deliver her Twilight fans now.

Had she done Charlie’s Angels promptly in the swell of the Twilight whirlwind (like Snow White and the Huntsmen) then maybe it would have popped. But she has largely been dormant from popcorn wide releases for the last seven years since 2012’s Twilight: Breaking Dawn – Part 2, busy excelling and wowing in specialty awards season and festival fare like Clouds of Sils Maria, Still Alice, and this year’s Seberg, to name a few. Stewart needed to be paired with equal or bigger-name actresses.

Sony knew Charlie’s Angels was a one quadrant movie, eyed at women 13-39, especially given its lack of action scenes, and wisely limited their exposure to what I hear is 50%, with co-finance partners 2.0 Entertainment and Perfect World. Sony claims the budget is $48M net; we’ve heard in the mid $50Ms. Tax incentives were taken in the pic’s Berlin and Hamburg shoots. Perhaps Sony should have spent more, because Charlie’s Angels biggest problem is that it has very low-octane, we’ve-seen-it-all-before action scenes. Heck, there’s more action in a 1980s Chuck Norris movie. After watching Charlie’s Angels earlier this week, I put the first two McG movies on Netflix, and it was like watching Star Wars in comparison to this reboot, with his sharp production design, camera movements, unique action, and comedy set pieces, and, of course, the first movie blasted Sam Rockwell out of a cannon. Understand that the first two movies in the series were able to compete and hold their own in an action space where, yes, Mission: Impossible and Fast & Furious (the first two films came out in 2001 and 2003) also thrived. Mission and Fast sequels distinguish themselves on multiple 10-minute action sequences that we’ve never seen before on screen; it doesn’t matter who the villain is. This Charlie’s Angels doesn’t have that. And not even a super-duper hit song “Don’t Call Me Angel” for the movie from Ariana Grande, Miley Cyrus, and Lana Del Ray can trigger lines at the multiplex; the music video clocking over 116M views on YouTube, per entertainment social media monitor RelishMix.

Some will claim that Banks’ version was never intended to emulate the meat and potatoes version of McG’s films; that this version was expected to be more comedic, and more feminist. Unfortunately, after McG set the table here with the franchise as an action film, you can’t reverse it. You can only outdo him. And with a franchise movie like Charlie’s Angels, you can’t make it for a one quadrant audience.

The film arrived on tracking with a $12M-$13M start, and really never budged, but sank. That means marketing didn’t work. I heard that a $100M global P&A was first planned on Charlie’s Angels, with the studio now reducing that overall cost greatly to around $50M and pulling back on expensive ads. Another hurdle in activating the young girl demo is that much of the pic’s cast isn’t on social media. RelishMix says that Banks is the social media star with over 6.6M followers across Facebook, Twitter, and Instagram, with Scott counting 3.4M.

Sony kept pushing Charlie’s Angels, which in hindsight means there were development issues. In May 2017, a release date was announced for June 7, 2019. When the cast was locked down in July 2018, Charlie’s got moved to Sept. 27, 2019. In October 2018 when Warners pushed Wonder Woman 1984 from the first weekend in November to summer, Charlie‘s took over the autumn spot, which was the same exact place the original 2000 opened. However, when Terminator: Dark Fate moved onto the same first weekend in November, Charlie‘s relocated to this weekend as they vied for a China release which they ultimately got.

Charlie’s Angels drew a 66% female crowd, split between 36% over 25 and 30% under 25. But both demos respectively graded it low at 68% and 79%, with men at 35% giving it a 68% grade on PostTrak. Diversity breakdown was 52% Caucasian, 21% Hispanic, 14% Asian/Other, & 13% African American. Charlie’s Angels best markets were on the coasts and big cities. But again, nothing to brag about in Friday’s $3.2M gross, which includes $900K from Thursday and Wednesday previews.

Says RelishMix, which also foresaw this disaster approaching on social media chatter, “Angels is the latest example in a ‘woke’ effort to reboot a franchise that many were not all that interested in to start with. In fact, many references to the 2000 version get a call-out as a reason this one doesn’t seem to compare – whether it’s the cast or the action teased from the film. And, as observed with other recent films, some action/adventure, unfortunately fans say they’re steering clear of this one because of its ‘girl power’ messaging.”