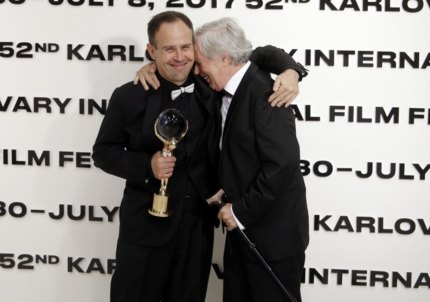 Ever since the triumph of Petr Zelenka’s Year of the Devil in 2002, a Czech film hadn’t managed to take home the Crystal Globe from the Karlovy Vary International Film Festival. But on Saturday, the 52nd edition of the festival changed all that by bestowing its main award upon the latest oeuvre by Czech director Václav Kadrnka, Little Crusader.

The film, which could be best described as an abstract medieval road movie, is based on an epic poem by Jaroslav Vrchlický about the mythological Children’s Crusade. The jury, comprising Anna Brüggemann, Sarah Flack, Ciro Guerra, Michel Merkt and Štefan Uhrík, awarded Kadrnka the first major prize of his career.

Besides this, another filmmaker from the region received the Award for Best Director: Slovakia’s Peter Bebjak, for The Line, a gangster thriller set on the Slovak-Ukrainian border. Men Don’t Cry, Bosnian director Alen Drljevič’s take on the rivalries in the former Yugoslavian countries, was awarded the Special Jury Prize.

The acting prizes were shared by Jowita Budnik and Eliane Umuhire, the lead actresses in Birds Are Singing in Kigali, the stark but enchanting film by Joanna Kos-Krauze and Krzysztof Krauze (who passed away recently) about the consequences of the Rwandan genocide, and Alexander Yatsenko, for his role in Russian filmmaker Boris Khlebnikov’s Arrhythmia.

Surprisingly, one of the most warmly received films in competition, The Cakemaker by Israeli filmmaker Ofir Raul Graizer, left the festival empty-handed, while the US title Keep the Change and young Romanian actress Voica Oltean (from Iulia Rugină’s Breaking News) got two Special Mentions.

In the meantime, the parallel East of the West section celebrated the success of the Russian title How Viktor “the Garlic” Took Alexey “the Stud” to the Nursing Home by Alexander Hant, with a Special Mention for Dede by Georgian filmmaker Mariam Khatchvani, and the parallel Documentary Competition section crowned the hilarious family diary by Spanish filmmaker Gustavo Salmerón, Lots of Kids, a Monkey and a Castle, with a Special Mention going to Atelier de conversation by Austrian filmmaker Bernhard Braunstein.

The festival’s closing ceremony also included tributes to US actor Jeremy Renner and Czech director Václav Vorlíček, who both received a Festival President’s Award from KVIFF president Jiří Bartoška. This edition also saw the handing out of Festival President’s Awards to US actors Casey Affleck and Uma Thurman, as well as a Crystal Globe for Outstanding Artistic Contribution to World Cinema to Ken Loach and Paul Laverty.

Next year’s edition will be held from 29 June–7 July.

Here is the full list of winners of the 52nd Karlovy Vary International Film Festival:

East of the West

Best Film
Lots of Kids, a Monkey and a Castle – Gustavo Salmerón (Spain)