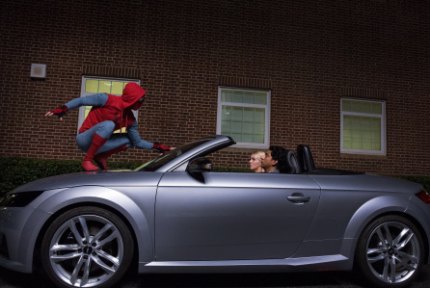 EXCLUSIVE: Sony’s Spider-Man: Homecoming has racked up more than $140 million in media value in a global promotional campaign that spans 30 brands. That’s the most lucrative ever for a Spider-Man title and on par dollar-wise with the global pushes of Sony’s 007 movies Skyfall and Spectre.

In addition, the value of Homecoming‘s campaign outstrips that of Marvel’s previous summer release Guardians Of The Galaxy Vol. 2, which analysts valued around $80M. Throughout the film’s PR and marketing drumming, Spider-Man star Tom Holland has been the face for the film, front and center, with director Jon Watts even helming a Dell ad spot and an ESPN NBA Finals custom ad.

“Teaming with these incredible worldwide partners, it signals to the world that Spider-Man: Homecoming is more than a movie: it’s a global cultural event,” said Josh Greenstein, Sony’s president of worldwide marketing and distribution.

“We have been evolving our promotional campaigns to go well beyond the 30-second spot,” added Sony’s partnerships group chief Jeffrey Godsick, who oversaw the campaign. “With longer form pieces of content, digital games and activations, and publicity stunts and events, the Spider-Man: Homecoming program best reflects this evolution.”

Having a car tie-in always indicates how platinum a pic’s promotional campaign is, and in Homecoming‘s case they had Audi both as a promo partner and for product placement. The new Audi A8 luxury sedan, tricked out with the Audi AI traffic jam pilot, made its big-screen debut in a scene where Jon Favreau’s Happy chauffeurs Tom Holland’s Peter Parker. The traffic jam pilot allows the A8 to take over driving for short periods of time, and we see this when Happy takes his hands off the wheel and the car continues to drive by itself.

Audi released the digital short “Driver’s Test” on YouTube which follows Holland’s Parker as he prepares to take his driving test with an instructor played by J.B. Smoove. The short drew close to 4.1M views on YouTube and 10M overall with a 99% positive response. On screen, Robert Downey Jr.’s Tony Stark appeared in the Audi R8 V10 Spyder while Parker hijacks the Audi TTS Roadster.

Sony also teamed with Dell behind and in front of the camera with a global campaign that highlighted the PC company’s new gaming laptop, the Inspiron 15 7000. Dell products were inserted into the pic’s storyline, and the summer marketing collaboration spanned TV, cinema, print, digital advertising, outdoor, and consumer activations. The Watts-helmed spot (2.8M YouTube views) showcased Parker daydreaming in class about an epic clash between Spider-Man and Michael Keaton’s Vulture. The spot aired on TV in the U.S., China, UK, Brazil, Japan, Australia and Mexico across cinema, online and TV. There was also a Spider-Man Scramble digital game in NYC’s Times Square tied to the launch of the Inspiron 15 7000.

Pizza Hut is Homecoming‘s worldwide food partner, propping up its Cheesy Bites pizza. The restaurant featured a custom TV commercial and pizza box in more than 15,000 locations globally. Some studios choose to follow a strict nutritional standard with their promo partners and the cost of that can be seen in fewer media dollars.

In the U.S. and Canada, General Mills, Synchrony, Dave & Busters and Movietickets.com, and Goodwill were among the brands involved with Homecoming. General Mills featured an “augmented reality experience” across their Big G cereal, Chex Mix, Nature Valley, Fruit by the Foot, and Fruit Roll-Ups lines whereby folks looking at certain boxes could transform themselves into Spider-Man and battle Vulture in scenes from the movie. Better than a Cracker Jack prize? How about a free Spider-Man water shooter inside the cereal box. Synchrony Bank served up a Marvel Mastercard. There was an exclusive Homecoming arcade game at Dave & Buster’s, in addition to in-store and media ads. MovieTickets had a four-pic purchase promo deal built around Homecoming. Goodwill, top YouTube talent and the YouTube Space LA partnered for a “we can all be Spider-Man” community campaign with a build-your-own suit contest. The winner was celebrated at the movie’s premiere and a co-branded Goodwill campaign focused on being a community hero.

Outside North America, Baskin Robbins/Dunkin’ Donuts touted a gift-with-purchase and sweepstakes in 2K-plus locations in Korea, Malaysia, Philippines, Thailand, and Vietnam. Some markets even created Spider-Man-themed ice cream cakes and new ice cream flavors. Danone Waters ran image campaigns in over 600K stories for their water products B’lue and Mizone in China, Indonesia, Philippines, and Hong Kong/Macau. Panasonic Batteries were in more than 40 European markets with a “Create Your Own Web” sweepstakes to win a trip to New York. Homecoming partnered with M&Ms in both a digital and in-theater ads throughout Europe and Asia. Mondelez (Trident and Hollywood Gum) advertised their bottle pack range with an on-pack Homecoming campaign across France, Spain, Portugal and Greece.

Other global Homecoming partners included Asus, Bimbo, Jetstar, KEF, Kellogg’s, Lieferheld, Pepsico, Plus, Roady, Snickers, Sony Mobile, Oppo, Optus, UK’s Compare the Market price comp website and the French Ministry of Transport and Security. Homecoming had a big footprint in Italy via Telecom Italia Mobile with multimedia promotions that were viewed closed to 11M times in a country with a population of under 60M. Doritos, which featured a Walkman-style player of the Guardians Of The Galaxy Vol. 2 soundtrack built into chip bags in North America, made inroads in China with custom Homecoming ad spots and an in-store presence. Total reach in the Middle Kingdom was 110M views.

When it comes to merchandising, we hear that’s where Marvel benefits the most because the studio controls that aspect of Spider-Man while Sony has the feature film license. Spider-Man retails sales per NPD were estimated to be in the $1.3 billion range annually three years ago when Amazing Spider-Man 2 hit theaters, while Avengers generated $1 billion.