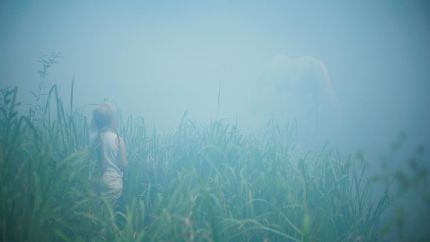 “When the Trees Fall” describes the gross poverty, ignorance and racism of rural Ukraine and takes in the extraordinary physical ugliness of the nearest city, whose high-rises makes Paris HMLs look like Park Avenue.

But the film, brought onto the market by Latido Films, is no ordinary social realist tract. For her feature debut, which world premiered in Berlin Film Festival’s Panorama and also screens at Transilvania Film Festival, the Ukraine’s writer-director Marysia Nikitiuk has delivered a genre-blender, a coming-of-age tale laced with a local mob sub-plot, vignettes of misery, in country and city alike and a magic realism. The last reflects the mindset of Vitka, a snub-nosed five-year-old rebel who lives in a benighted village in the Ukrainian sticks. She bears witness to her teen cousin Larysa enjoying a passionately physical affair with a young hoodlum, called Scar. But when Scar is forced to go on the run, and Larysa caves in to her mother’s pressure to do the right thing and marry a young local pig farmer, Vitka has to learn to fend for herself in a hostile environment. To do so, she uses her imagination.

Mihal Englert, DoP on Malgorzata Szumowska’s “Body” and Ari Folman’s “The Congress,” serves as cinematographer. The film was lead-produced by Igor Savychenko at Ukraine’s Directory Films with the Ukraine’s Solar Media Entertainment, Macedonia’s Focus In and Poland’s Message Film. Nikitiuk’s screenplay won the Kieslowski award for best script at Cannes in 2016, as part of ScriptEast, a Creative Europe development program. It was selected for Works in Progress at Warsaw, Tallinn, Vilnius, Trieste and Odessa. Nikitiuk talked to Variety at Berlin about her debut and Savychenko about the state of Ukraine’s re-building film industry:

Why the genre mix?

The story came to me with all its controversial sides naturally. I didn’t construct it as a puzzle with cold heart, but rather it was mostly emotion leaded storytelling. And, at the core of a story, for me, was always little Vitka, it couldn’t be pure social-realism. Vitka’s perception is a key for mixing these genres together naturally. Being in her role as part of a childish magical world she reflects sins of adults like a mirror.

Taking in the violence of post-Soviet era, “When the Trees Fall” also describes the violence in family relations. Larysa’s mother almost slaps Larysa into submission. Her grandmother threatens to beat Vitka when she is naughty. Could you comment?

When I was little I witnessed a lot of violent family relationships, and even experienced some. Getting older I understood that most people in our post-Soviet world live with family traumas and pass them to next generation. Only now people in Ukraine are starting to learn to be good parents in order not to ruin a growing life. I think it comes from our totalitarian past – the Soviet Union didn’t need to have happy people, but obedient and controllable.

What decisions did you take as a director to knit the different elements of “When the Trees Fall”?

First of all, I was working hard with actors with support from experienced theater teacher-director Igor Koltovskoy. Knowing that the story has at least three different genre elements, I pushed actors to live and exist in one context, so they would be on the same level. Also I tried in the script, and latter with editing, to combine everything with poetic fantasy elements, like the passing and appearance of a white horse.

This story is completely Ukrainian. I hope all these workshops helped me to make it more clear for a European audience. Also, I was very careful with advise, in order not to lose the most important and vital core of the film. I was lucky, my tutors during all those programs were very gentle with text and cuts. For example, script doctor Christian Routh on ScripTeast told me: “The script is completely wrong, but somehow it works, so let’s try not to ruin it.”

For most films, yes. Feature film can aim for aid from the Ukrainian State Film Agency, but it covers only 50% of the budget and it’s almost impossible to find the other 50% inside Ukraine. So – we have to go international to complete financing. But also this gives an opportunity for the film to get artistic input and distribution in co-producing countries.

Do you feel you are in any way a member of a new generation of Ukrainian filmmakers? If so, what are its hallmarks?

You know, we’re now in the process of building Ukrainian filmmaking. All my director friends are obsessed with telling contemporary stories about modern Ukrainians, but we are also so different. It looks like we came not from one tradition, but from traditions of many different films, depending on which ones we liked. I can say the same about Ukraine as a whole. For more than 20 years people in Ukraine wanted to be someone else, and only now we are discovering who we really are.

For your company, Igor, what do you see as the way forward? How would you like to continue and grow?

Savychenko: In the Ukraine it’s very difficult to do films because we have only one film fund where we can get money. It’s nearly impossible to get money from TV or other sources, no pre-sales, no MG; co-production is the only way. Most films I do are debuts with first-time directors. Film schools in Ukraine are archaic, but lots of filmmakers are still open-minded after graduation. I prefer to catch those ones before they go into routine work for television or into commercials where they quite often lose they artistic vision and ambitions.

You’ve said the Ukrainian film industry is building. How?

Savychenko: The Ukrainian State Film Agency started in 2011. Before that there was almost nothing. In 2011, it started giving money and growing its budget. It was a start for Ukrainian filmmaking, a good start. When we first started working on an international level it was extremely difficult so I did five feature films with the support of the State Agency. And something like 30 shorts and documentaries. In the beginning, it was difficult to do co-productions because nobody knew about Ukrainian filmmaking. When got to Berlin or Cannes, we were like people from some far off land. Year-by-year as our films went to big festivals, we started to get recognized. Also locally comedy “Dzidzio,” which I did not produce) was one comedy, which was very well received by audiences. They recouped, which was great sign for the whole industry. Another notable film has been “Cyborgs: Heroes Never Die” about the current war in Ukraine with pro-Russian separatists.