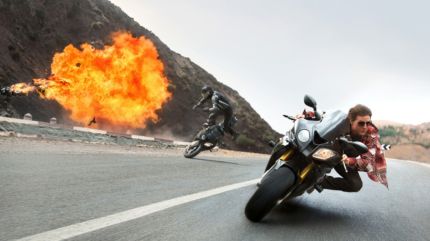 UPDATED: “Mission: Impossible 6” will halt production in London for between six weeks to three months to give Tom Cruise time to recover from an on-set injury, according to four people with knowledge of the situation. The actor hurt himself doing stunt work for the film last weekend. Cruise broke his ankle, Paramount confirmed, and may have also hurt his hip, one individual close to the production said. He was scheduled to see his doctor this week, said sources close to the production, after which the studio will determine how long shooting will be delayed.

In a statement, the studio said, “During production on the latest ‘Mission: Impossible’ film, Tom Cruise broke his ankle while performing a stunt. Production will go on hiatus while Tom makes a full recovery, and the film remains on schedule to open July 27, 2018. Tom wants to thank you all for your concern and support and can’t wait to share the film with everyone next summer.”

One person affiliated with the film suggested that the production could still wrap on time if the focus is put on post-production elements and scenes with Cruise are left for the end of the shoot.

But any production stoppage could cause headaches for other cast members such as Simon Pegg, Henry Cavill, and Rebecca Ferguson. Many of these actors are also slated to start filming other projects as soon as “Mission: Impossible 6” wraps in the fall. Paramount is also concerned that any delay could also negatively impact the release and filming of Cruise’s “Top Gun” sequel, which is set to premiere in July 2019. Both films are being co-financed by David Ellison’s Skydance Media.

TMZ released video on Sunday morning of the actor attempting a leap across a building gap, only to fall short, smack into the wall and walk away with a limp. After pulling himself onto the platform that he slammed into, the actor attempts to run, but stumbles. The crew then uses the pulley system to pull him back to the first platform, where they assist the actor off-camera.

Cruise has long prided himself on doing his own stunts, even defying studio bosses and insurance companies in order to give his films’ signature set pieces a greater realism. For his recent reboot of the “The Mummy,” the actor did 64 takes of a plane crash sequence in zero gravity, and for the fourth and fifth “Mission: Impossible” movies, he hung off the Burj Khalifa and clung to the wing of a moving plane.

A representative for Cruise did not respond to a request for comment.